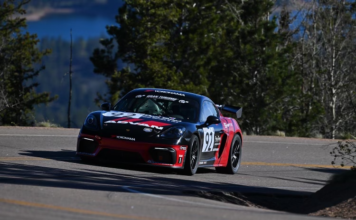 Colorado Springs, Colo. (14 June 2022) – With 156 turns in 12.42-miles, nearly 5,000 feet of elevation gain, a range of different surfaces, and a high-intensity one at a time format, there is nothing in motorsport like the challenge of the Broadmoor Pikes Peak International Hill Climb (PPIHC). This month, young Loni Unser will look to add to her famous family’s outstanding record in the annal event as she is set to contest the 100th running of the “Race to the Clouds” June 26.

The Unser name is nearly synonymous with the Pikes Peak event, with the family having first competing in 1926 with Louis and Joe Unser. Louis set a course record in 1934, and the Unsers added more success as Al Sr., Robert W. (Bobby), Al Jr, and Robb Unser all took to the challenge.

In 1997 both Louis and Bobby were inducted into the Pikes Peak Hall of Fame, and most recently, Al Sr. joined them in 2020. While Unser is the only female in her division this year, she’s not the first female Unser to take on Pikes Peak. Jeri Unser—daughter of Bobby and his wife Norma, taking rookie of the year in 1998 before winning the electric car division in 2003.

“Pikes Peak is a completely different race than anything I’ve ever done and I could not be more excited to make the most of this opportunity,” said Unser, who regularly races in WRL competition with Round 3 Racing. “Of course it is a really special place for our family, and I am really grateful to have the chance to compete there this month. I know I will be learning so much in a short period of time, but I hope all the preparation and tips from my family pay off!”

PPIHC will begin practice and qualifying on Tuesday, 21 June, leading up to the race on Sunday, 26 June.