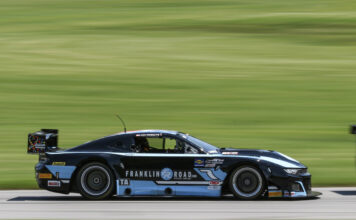 Lexington, OHIO – June 17, 2022 – Franklin Road Apparel Showtime Motorsports supremo Ken Thwaits enjoyed a banner season in 2020, winning four of the eight races he contested to become the first-ever XtremeGT class Champion. It’s fair to say that it’s 2022 that has seen the Tennessee based team take a great leap forward in the principal muscle car competitions with four racecars across TA and TA2, more than making a presence felt. Now the team heads to the Mid Ohio Sportscar Course for Round 7 of the 2022 Trans Am presented by Pirelli Championship in their best position in the two Championships with sights set firmly on the podium once again.

Firstly, Ken himself has made a huge impression in the TA Class this year with four podium finishes out of six races putting him on 135 Championship points, level with former Champion Tomy Drissi. It’s a terrific achievement by the whole team with the cherry on the cake in the TA Class being Paul Menard’s imperious display at Charlotte where the team scored their first win in the top division.

In the TA2 Class, former Champion Cameron Lawrence currently sits in P4 out of 48 competitors with 115 points and is just three points behind third placed Tyler Kicera and nine behind second placed Thomas Merrill. Cameron himself has been on the podium twice, at Road Atlanta and last time out at Lime Rock. In the second TA2 car, former West Coast Champion Carl Rydquist has a top ten finish at Sonoma to his name.

While not everything has gone according to plan, the results are a strong vindication of Thwaits’ decision to scale up his Trans Am operation and the popular team boss was typically optimistic when we spoke to him ahead of the seven-hour drive northeast from his Tennessee HQ.

“If you’d told me at the beginning of the year that only Chris Dyson would have more points in the Championship than me when we set off for Ohio I’d have said you were dreaming, but here we are! It’s getting to the point where I’m disappointed if I don’t make the podium and that’s awesome. It’s a testament to the whole team and the hard work everyone has put in.”

He went on, “I think we’re getting tighter as a team and faster on the track as the season wears on. I’m more comfortable in my car than ever before and we’re doing everything we can to make the other guys competitive too. Cameron was on the podium again last time and that’s what we’re aiming for again here in Ohio. I’ve made Pole there before and l’d be delighted to do so again.”

Opened in 1962 by Les Griebling and several Mansfield-area businessmen as a location for weekend sports car racing, Mid Ohio originally had 16 turns, with a left turn in what is today known as “thunder valley,” but the turn was straightened after just one year of operation. Nevertheless, it’s still a particularly twisty and rural circuit, and while its picturesque views are enchanting, it presents a tremendous challenge to car and driver.

The Racing will be live on the Trans Am YouTube Channel and highlights will be shown on the CBS Sports Network after the event. Check local press for details.

Visit the team’s website for Showtime Motorsports, www.showtimemotorsports.net
and keep up to date with the Trans Am Series presented by Pirelli at www.gotransam.com.