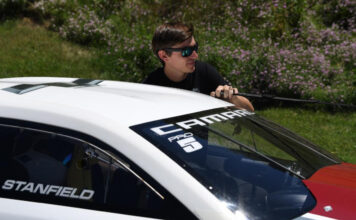 Stanfield earned his first victory of the season at Phoenix in February and has reached the finals the past two races – winning June 19 at Bristol Dragway — to make a dent in Elite Motorsports teammate Erica Enders’ points lead.

“Being able to hand my dad a Pro Stock Wally at Bristol on Father’s Day is probably up there among my biggest (accomplishments),” said Stanfield, who won twice in Top Dragster at Bristol before jumping in a Pro Stock car.

﻿“I don’t know if it necessarily means it’s clicking for me just yet. They’ve done a really good job with my race car. I should be doing well with as fast as it is.”

Enders, driver of the Melling Performance/Elite Motorsports Camaro SS, has advanced to the final round in five of the seven races, winning four. She holds a 19-3 record on race day.

Enders is also the defending Pro Stock winner at Norwalk. She defeated Greg Anderson, who went on to claim the 2021 class title in the HendickCars.com Camaro SS, in the final. He continues the quest for victory No. 100 to join John Force (155) as the only professional drivers with triple digit wins.

Brittany Force, runner-up in Top Fuel at Norwalk last year, continues to pace the field in points in the Flav-R-Pac/Monster Energy Chevrolet dragster. Force, with three victories, has held the top spot in the standings for a career-best five races.

Robert Hight, the No. 1 Funny Car qualifier at Bristol in the Automobile Club of Southern California Camaro SS, also has three wins and holds down second in the standings. He also holds the track Funny Car speed record, set in 2017. John Force, who reached the semifinals last week in the PEAK/BlueDEF Platinum Camaro SS, is fourth in the Funny Car standings. His next round win will the record-extending 1,400th of his illustrious career.

Austin Prock, a semifinalist in two races of the past three races in the Montana Brand/Rocky Mountain Twist Chevrolet dragster, is fifth in Top Fuel standings.

The race weekend will also feature the fifth round of the Constant Aviation Factory Stock Showdown. David Barton of Reading, Pennsylvania, took a step toward his second title in the category by driving his Chevrolet COPO Camaro to the victory last week at Bristol in an all-COPO final round against Stephen Bell of Shreveport, Louisiana.

“I feel like we have good momentum going. Every single race we’ve had a car in the final,” said Barton, who moved to the top of the standings. “We’ll keep it rolling as good as we can.”

BRITTANY FORCE, JOHN FORCE RACING, MONSTER ENERGY/FLAV-R-PAC CHEVROLET DRAGSTER (three-time winner this season; points leader; runner-up at Norwalk in 2021): “Heading into Norwalk, a quick turnaround from Bristol. Definitely OK with that. This Monster Energy / Flav-R-Pac team plans to pick up some points. We get four qualifying rounds before going into race day, which is awesome. We’re looking for a top three qualifying position and getting as many points as we can then going rounds on race day and getting into that winner’s circle.”

AUSTIN PROCK, JOHN FORCE RACING, MONTANA BRAND/ROCKY MOUNTAIN TWIST CHEVROLET DRAGSTER (runner-up at Pomona opener; semifinalist in two of past three races): “I’m excited for Norwalk. I have some unfinished business there. I was able to fill in for Clay last year and made it to the semis. I feel like that opportunity put me back on the map from a driving aspect. I’m looking to go all the way this year with my Montana Brand / Rocky Mountain Twist team. To get a win there would be an awesome story. I think we have the team to do it and we’re going to come in swinging.”

JOHN FORCE, JOHN FORCE RACING, PEAK BLUEDEF PLATINUM CHEVROLET CAMARO SS (No. 1 qualifier and Charlotte four-wide winner; won at track in 2014): “I’ve got a lot of history in Norwalk. The Bader Family, they do as amazing job putting on a real show. The stands are always packed, which is what drag racers live for, turning that corner and seeing all those fans. That really gets you going, really gets my energy up. This PEAK Chevy is right there in the hunt. Danny Hood and Tim Fabrisi, my crew chiefs, they make the adjustments, and they figure this Camaro out, we’ll be ready to go.”

ROBERT HIGHT, JOHN FORCE RACING, AAA OF OHIO CHEVROLET CAMARO SS (three-time winner this season; second in points; holds track Funny Car speed record, set in 2017): “I like these back-to-back races, I don’t like having all the downtime. So, I’m excited to be heading to Norwalk. We didn’t have the performance we wanted in Bristol and this gives an opportunity for this AAA team to quickly pick things back up,” Hight said. “We’re still second in points and it’s a tough field right now. We aren’t the only ones with three wins and when we aren’t winning, we still need to be going rounds, picking up qualifying points and making sure we’re still in it. We have to be consistent.”

KYLE KORETSKY, KB RACING, LUCAS OIL CHEVROLET CAMARO SS (No. 1 qualifier at Phoenix; runner-up at Gainesville; semifinalist in June 19 race at Bristol; third in standings): “Norwalk is a great track. Running back-to-back like this I feel better as a driver. I get more confidence. I was driving good and felt good (at Bristol). I thought if I could get past Greg (Anderson) in the second round I have a good shot at winning the race. The car was running good. In the semis, we just missed the setup a little bit. Norwalk, here we come. It is supposed to be good and hot, which my car likes and has a good tune-up for. We’ll be ready to go.”

DALLAS GLENN, KB RACING, RAD TORQUE SYSTEMS CHEVROLET CAMARO SS (winner at Gainesville; No. 1 qualifier at Epping; semifinalist in June 19 race at Bristol): “Going to Norwalk is one of my top races every year, even before I start driving my RAD Torque Systems / KB Racing Chevrolet Camaro. I consider it one of the nicest facilities on the circuit and I know our car will respond well to it if we keep working off our semifinal round appearance momentum from Bristol last weekend.”

GREG ANDERSON, KB RACING, HENDRICKCARS.COM CHEVROLET CAMARO SS (reigning Pro Stock champion; seeking to become second pro driver with 100 wins; has three victories at the track): “The Summit Racing Equipment event is in just a few days at one of the nicest tracks we go to, and I’m looking forward to getting there. That’s been a good race for us, a good race for me, personally, and I would really like to have a get-well weekend there for this HendrickCars.com team.”

TROY COUGHLIN JR., ELITE MOTORSPORTS, JEGS.COM CHEVROLET CAMARO SS (runner-up at Phoenix; from Columbus, Ohio): “I always love racing with family, I love racing in the great state of Ohio, and it’s great when you know you’ll have a ton of support in the stands with all the JEGS associates who are always on hand, so this weekend checks all the boxes for me. We found some issues with the suspension and shocks on our race car since the last race and everything has been corrected so we’re looking to have a strong rebound race. My thanks to Mark Ingersoll, Kyle Bates, Ricky Calloway, and Kelly Murphy for all the extra hours they’ve put in getting this new RJ Race Cars chassis up to speed.”

CAMRIE CARUSO, CARUSO FAMILY RACING, KINGS OF VAPOR CHEVROLET CAMARO SS (first season in Pro Stock; No. 1 qualifier and runner-up at Houston): “I have raced at Norwalk a bunch and I am excited to have Kings of Vapor on my Camaro this weekend. I won there in Top Alcohol Dragster and I have raced my 632 car there. My dad has won there in Pro Mod so I really enjoy Norwalk. The fans have always been great and I am looking forward to racing my Kings of Vapor Chevrolet Camaro Pro Stock car this weekend.”