Sean Creech Motorsport to carry US and Canadian colors at CTMP 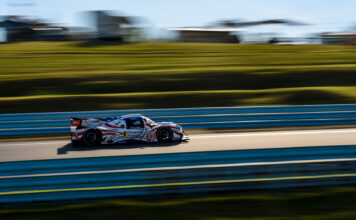 Creech has competed in sports car racing for over 30 years, but it’s been three years since the team – and the series – last traveled north of the border. This year, veteran duo João Barbosa and Lance Willsey are behind the wheel, ready to contend for another LMP3 podium finish in their No. 33 SCM Exelixis/Focal One/Alta Equipment Ligier JS P320.

The team has long carried a Canadian tribute on its LMP3 cars when competing in Canada, incorporating the maple leaf into its stars-and-stripes motif. This year will be no exception, with the nose of the car sporting both the American stars and the maple leaf, while the engine cover displays a stylized Canadian flag – both in tribute to the passion of the Canadian fans.

The young Creech first competed at CTMP (then called Mosport) after returning from several years in Europe working with Dauer Racing to work for Jim Busby Racing, Kevin Doran Racing, and Mike Colucci Racing. Fast forward to 2018 when Creech and his team managed the Extreme Speed Motorsports program in IMSA Prototype Challenge and brought home two podiums at CTMP (with Kris Wright and Yann Clairay finishing second, and Max Hanratty and Garett Grist finishing third). Wright would go on to capture the series championship, with Hanratty third in the final standings.

Now, Creech returns to CTMP with the fourth-place team in the LMP3 class, on the heels of a sixth-place finish in last weekend’s Sahlen’s Six Hours of the Glen at Watkins Glen International. With an early incident in that race putting them down in the standings, the team looks to rebound at a track that holds a special place in the hearts of the team.

“This place has some serious history,” said Creech. “Can-Am, Formula One, GTP. We first ran here back in the early 90s so I’ve been here many times over the years. This is such a fast track, with a lot of elevation change, so you have to have a lot of grip in the car, both mechanical and aero. In that way, the back-to-back races have some similarities. We’ll start from scratch at CTMP because everything about the car is different than it was the last time we were here – different chassis, different tires. But we have a good baseline from Watkins Glen.”

Barbosa, a two-time WeatherTech series champion, has a podium in six races at CTMP and looks forward to testing the Ligier’s pace on the notoriously quick 2.459-mile circuit, located just over an hour from Toronto.

“CTMP is an old-school, very fast track,” said Barbosa. “We’re looking forward to finally getting back there, it’s going to be fun. I’ve had some good races in the past, though not always the best finishes. But it’s going to be fun with these cars!”

Willsey has raced at CTMP in several series and ran with Creech in the IMSA Prototype Challenge in 2018 and 2019. He will also contest the IPC race Sunday morning (alongside Red Deer, Alberta’s Parker Thompson, who is currently contending for the Porsche Carrera Cup North America championship title). Ask Willsey about returning to Canada and the first thing he thinks of is the enthusiasm of the motorsports fans who frequent the track.

“The environment at CTMP is one of my favorites,” said Willsey. “The fans are among the most knowledgeable and passionate fans of any track we go to. I’m really looking forward to it, especially with our special livery for this weekend. Canada will always be a very special place to and for me. It is where my mothers family settled and built their lives after fleeing the Nazi invasion of Czechoslovakia. Every visit is quite special for me.

“The track is a significant paradox,” Willsey continued. “It became one of my favorite tracks in just a small number of laps – it’s high-speed, high-commitment, which made it incredibly enjoyable to drive. But much like other tracks, there’s so much local knowledge in regard to finding the grip on track and car placement. I need to figure out some of the nuances, but the track is spectacular.

The team would like to thank partners Alta Equipment Company and Focal One for their continued support.

The two hour and 40-minute Chevrolet Grand Prix takes the green flag Sunday at 3:05 p.m. The race will be broadcast live in the U.S., in its entirety on network NBC and Peacock TV in the US, and on REV TV in Canada. International viewers can watch via IMSA.tv, with IMSA Radio also available at IMSA.com.

Team leader Sean Creech has competed in a multitude of sports car series from 1990 until the present day, including Group C, IMSA GTP, WSC, Grand-Am, SRO World Challenge, and IMSA. SCM will contest the full WeatherTech SportsCar Championship in 2022 with João Barbosa and Lance Willsey. http://seancreechmotorsport.com/

An industry-leading material handling and construction equipment company, Alta Equipment is an innovator of solutions, delivering diverse products and unrivaled support centered on building lasting customer relationships. Alta Equipment began in 1984 with a single location in Detroit and has grown to 57 locations throughout the Midwest, Northeast, and Florida. https://www.altaequipment.com/

One in eight men will be diagnosed with prostate cancer during their lifetime in the United States. The Focal One® HIFU Prostate treatment offers patients a non-invasive outpatient procedure to target prostate tissue while avoiding the common side effects such as loss of urinary continence and sexual function. The Focal One treatment uses high performance, high intensity focused ultrasound (HIFU) to precisely target and ablate the prostate, allowing patients to quickly return to normal activities.