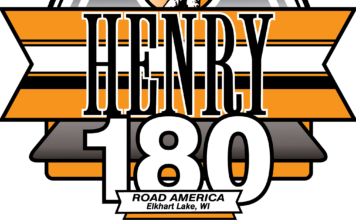 • At 4.048 miles in length, Road America in Elkhart Lake, Wisconsin, is the longest track on the NASCAR Xfinity Series schedule. Momentum is key when navigating its 14 turns, and before he even turns a wheel on the road course located 65 miles north of Milwaukee, Riley Herbst comes into Saturday’s Henry 180 with plenty of momentum. In the series’ last race at Nashville (Tenn.) Superspeedway, Herbst won the pole and scored a strong third-place finish to tie his best result so far this season, as he also finished third five races ago at Darlington (S.C.) Raceway. Herbst has five top-five finishes already this season to equal his top-five tally from all of last year.

• Herbst will represent Henry Repeating Arms in the Henry 180. The 2022 NASCAR season marks Henry Repeating Arms’ fourth year with Stewart-Haas Racing (SHR) and its second with Herbst. The American manufacturer of classic rifles and shotguns is a world leader in the lever-action category and is a loyal customer of Haas Automation, whose founder, Gene Haas, co-owns SHR with Tony Stewart. With an array of Haas CNC equipment, Henry Repeating Arms makes more than 300,000 rifles and shotguns annually from its headquarters in Rice Lake, Wisconsin, and at its second manufacturing facility in Bayonne, New Jersey.

• While Road America is akin to having a road course inside a state park, last year’s Henry 180 was no walk in the park for Herbst. The Las Vegas-native was forced to start at the rear of the 36-car field after an accident in practice sent him to a backup racecar. Undaunted, Herbst wheeled his No. 98 Ford Mustang into the top-20 after only five laps and, by the end of the first stage, he was 10th. When the final stage got underway on lap 22, Herbst restarted in eighth and broke into the top-five just one lap later. When the 45th and final lap clicked off the board, Herbst crossed the stripe in seventh.

• Herbst has one start outside of the Xfinity Series at Road America – a lone ARCA Menards Series start in August 2017. The then 18-year-old driver earned a runner-up finish during his first season in the series where he scored a win along with six top-fives and 10 top-10s in 19 starts.

You’re welcoming back Henry Repeating Arms to your No. 98 Ford Mustang on Saturday for the Henry 180. Talk about what the support of different sponsors means to you and your career.

“Excited to have Henry Repeating Arms back on my Ford Mustang this weekend. We didn’t get them the finish that we wanted to at Darlington last year, so I’m ready to give them a better finish at Road America. I’m grateful for their support and that they’re letting me run their paint scheme during the Henry 180. A win would be the biggest ‘thank you’ that I could give them. Let’s get the job done.”

You scored a runner-up finish in the ARCA Menards Series race at Road America in 2017 and finished seventh in last year’s Henry 180. Do you feel like there’s some unfinished business there?

“Not really. You never want to finish second as a racecar driver, but we outperformed our car back in 2017 after making some mistakes at the beginning of the race. Last year, we had a rough start to the race weekend after wrecking in practice, but we were able to battle all the way from the back to get a top-10 finish. I think if we can make it through the weekend without any mistakes and stay out of trouble, we can be in contention for the win at the end. We have the speed.”

The last road-course race at Portland (Ore.) International Raceway didn’t end like you had hoped, but you showed speed and ran third for a majority of the first stage until an incident. Do you feel like the team as a whole has improved on road courses over the past year?

“I definitely think we’ve improved. I made a mistake in Portland that put us back in the pack and then got involved in an incident, but we had the speed before that. I was more frustrated with myself than anything. Overall, though, we’ve been working on our road-course races and I think we’ve been improving. We just need to put a whole race together without any mistakes and I feel like we can do that at Road America.”