8 Most Dangerous Roads In North America 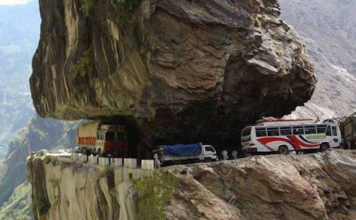 Traffic accidents still pose a serious threat despite advances in infrastructure, and some roads are disproportionately riskier than others.

Here are the 8 most dangerous roads in North America:

Southern British Columbia is home to the notoriously hazardous Coquihalla Highway. It is a section of Highway 5 and measures roughly 200 kilometers. Due to its numerous kilometers of treacherous, icy roads that are steep on both ends, it is one of the worst roads in all of North America during the winter. It is not advised for inexperienced drivers to travel via the mountain pass in the winter because of the conditions. Driving on this route is easy most of the year, although there are often at least 500 incidents during the winter.

Near the Prudhoe Bay oil fields and the Arctic Ocean, the Dalton Highway, a two-lane gravel road, runs for 414 miles to the Elliot Highway, slightly north of the towns of Fairbanks and Deadhorse. Alaska’s Dalton Highway is sometimes referred to as “America’s Loneliest Highway.” There are numerous sharp turns and winding roads along this path, and for miles, upon miles, there is no one to be seen.

Highway 63, sometimes known as “Suicide 63,” is the only all-weather route out of Fort McMurray, making it a vital route for the population and generating a lot of traffic.

According to a reputable Alberta car accident lawyer, Michael Hoosein, there are plenty of accident cases that happen on this road every year.  On the 400-kilometer stretch of the deteriorating, narrow two-lane blacktop, 22 people have died and more than 250 have been injured in the last five years.

The Lake Pontchartrain Causeway is not recommended for people who are fearful of heights. This extensive, divided highway is the second-longest causeway in the world, behind only China’s Jiaozhou Bay bridge in length. It spans a lake with a maximum depth of 20 meters. Around 43,000 automobiles cross the bridge each day, which is roughly twice the Madison Square Garden’s seating capacity, which makes about 12 million travelers yearly.

93 collisions occurred on the Causeway in 2021, and 12 fatalities have resulted from drivers crashing through the barriers and falling to the depths below. The bridge flooded and fell in many places after the terrible hurricane Katrina in 2005.

A crucial connector between the Prairies and the West Coast, Kicking Horse Canyon in British Columbia is one of the nation’s most hazardous highways. Averaging 5,000 vehicles per day, around 10,000 vehicles travel on the steep cliffside route during the busiest months, with roughly 20% of those being semi-trucks.

There were 454 accidents between the years 1994 and 2005, 9 of which resulted in fatalities, and 183 of which caused injuries. The Kicking Horse Canyon Highway is not recommended for persons with weak constitutions due to its high accident severity and frequency, bad bridge conditions, and low reliability.

The South Shore of Nova Scotia’s Highway 103 has a reputation for being the province’s most hazardous road. The provincial Department of Transportation reports that between 2006 and 2009, 29 individuals died in collisions on Highway 103.

In Nova Scotia, traffic fatalities on the 103 occurred roughly once a week on average in 2019, but between October and December, there were 71 fatalities.

The path from Tibbitt to Contwoyto, which is in Canada’s Northwest Territories, is regarded as one of the world’s most dangerous roads. The majority of the road, which is 85 percent over deep, frozen lakes, is dangerous.

This means that ice can shatter at any time and consume vehicles in the frozen water.

This specific stretch of roadway, which is slightly over 400 km long and traverses much of northeast Alberta, links the Athabasca oil sands and its villages to Edmonton and the rest of Canada. Due to the high number of accidents that happen on it, it is known as “Highway of Death.”

Roads are dangerous and can result in accidents at any time. Always stay prepared to reduce your speed and keep your eyes open.

In Racing, The Response Is Key For A Full Post-Crash Recovery