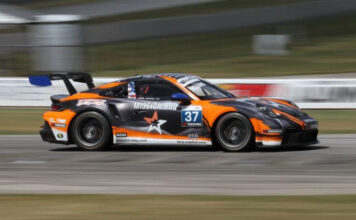 The weekend’s pair of 40-minute sprints on the 4.048-mile road course start at 4:25 p.m. on Saturday with Sunday’s final race of the weekend set to go green at 12:05 p.m. Both races can be viewed live on the Porsche Sprint Challenge North America by Yokohama YouTube Channel.

Williams has returned to TPC Racing this year for the first time since 2015 and moved into the championship picture in the top-tier Porsche 992 class after a string of consistent finishes this season in the No. 37 Mission BBQ Porsche 911 GT3 Cup. Williams is on the brink of his first podium finish after a run of top-five results that includes season-best fourth place finishes at Mid-Ohio and last month at VIRginia International Raceway.

Heading into this weekend’s Road America rounds, Williams is third in the 992 championship standings with 344 points. He trails the second-place competitor by just 23 points and is 33 points out of the championship lead.

The podium has been a familiar destination for TPC driver Michael Levitas this year in his No. 36 Erin Levitas Foundation/TPC Racing Porsche 911 GT3 Cup. Competing in the 991 division for older Porsche GT3 Cup cars, Levitas’ most recent visits to victory lane were a third in class at Mid-Ohio and a season-best second in Saturday’s opening race at VIR.

The complete lineup of TPC contenders at Road America includes Scott Schmidt in the 992 division and Rob Lorndale in the 991 class.

All four TPC drivers were on pace in a productive day of unofficial testing at Road America on Thursday. In the 991 class, Lorndale and Levitas were sixth and seventh respectively in the first of the day’s four test sessions. Lorndale clocked in just ahead of Levitas with a top lap time of 2:16.938.

Harris Levitas, TPC Racing Director of Race Operations: “It’s great to have our TPC Racing Porsche Sprint Challenge by Yokohama program back to its full four-car strength for this weekend at Road America. Between Porsche Sprint Challenge testing and the continuing development and testing of our IMSA Super Trofeo program, we have pretty much taken up residence in Elkhart Lake and don’t plan on leaving anytime soon! The testing has gone well and we are looking forward to a pair of great races both this Saturday and Sunday and at next weekend’s Super Trofeo doubleheader. David Williams has been both consistent and fast all season and joined Scott Schmidt, Rob Lorndale and Michael Levitas in a productive test session Thursday. It was only the first test. You never really know how you stack up until official sessions start, but today was a good indicator that some of our testing and hard work has paid off. Scott is getting quicker in 992 while Rob did well to lap on pace with Michael in 991 for at least the first test session. Long weekend ahead and we are up to the challenge.”