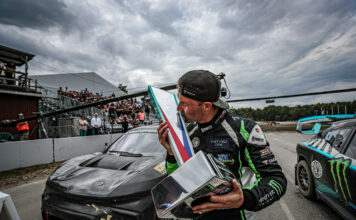 Nitro RX Heads Next to the U.S.

The finale capped off a very successful weekend for Nitro RX’s host nation who took nearly half of the available podium positions on day one. The home country fared even better on Sunday, claiming six out of nine podium spots.

After the event, Bakkerud reflected on the impact of Nitro RX coming to Sweden, a rallycross hotbed. “It’s pretty epic. With Nitro coming in and putting in the time and the work to renew Strängnäs Motorstadion and make it a new area, it is so great for rallycross. I think it was an awesome event. The crowd loved it.”

In the final, Bakerrud survived a quick and combative start to take the lead, fending off Gronholm and Saturday’s top qualifier, Oliver Eriksson (SWE). Bakkerud held his ground against Larsson, winner of Nitro RX’s opening UK round, to secure his win. Kristoffersson climbed all the way from the back of the starting grid to finish strong in third.

Bakkerud said afterwards, “I knew if I didn’t beat Oliver off the line and get first through turn one I would be outside and probably eating concrete still. It was very tough. Later I heard on the radio that Robin was catching me, which I saw late on the big screen when he went to the joker. So, I just squeezed everything I had on the Nitro boost and we brought it home.”

Bakkerud added, “This is the first time that I get to keep the big trophy, which feels awesome. As a race car driver, you love trophies. And this one is going to have a very special place on the shelf.”

Bakkerud also spoke to the impact of Kristoffersson competing at Sweden. “It means a lot. His coming in and giving his feedback on the car [Group E’s new all-electric FC1-X] is mega. At the same time, Johan is so quick off the box and is such a tough rival, it shows that the level of Nitro RX drivers is world class.”

In the NRX NEXT developmental class, Nitro RX newcomer Tommi Hallman (FIN) completed a weekend doubleheader, earning consecutive gold medals in both finals and extending his streak of NEXT podium finishes to four-straight. 2021 NEXT series champion Casper Jansson also doubled on the podium, finishing second on Sunday, while George Megennis (USA) came in third.

NRX Next Final Results (Sweden – Round 2):

Sunday’s Supercar final went down to Fraser McConnell (JAM) dueling with Yury Belevskiy (CHE) for the fourth consecutive time. McConnell crossed the line first, but after he was hit with a three-second penalty Belevskiy was awarded the win. Sweden’s Gustav Bergstrom took third.

A pair of Swedes also podiumed in Crosscar, a new support class for Nitro RX. Sebastian Enholm and Jimmie Osterberg finished first and second respectively, with Pasi Penttinen (FIN) rounding out the podium.

Nitro RX is now set to cross the Atlantic and will head to America for a return to ERX Motor Park on October 1-2. Located outside of Minneapolis, ERX is the Midwest’s premier year-round motorsports facility. Last year’s purpose-built track was one of the fastest of the season, so look for the Nitro RX team push the limits further still this fall.

Bakerrud is eager to compete in the US and revisit ERX Motor Park. “This is the track that I look forward to the most. We all had a great time racing there last year and it is such an epic, American-style track. The flow of the course and the fast corners, it all allows for so much more action.”

To experience Nitro RX’s in person, tickets can be purchased at nitrorallycross.com. Fans can also watch live on Peacock in the U.S. as well as on YouTube worldwide.