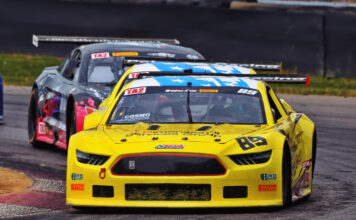 NASHVILLE (1 August 2022) – Guy Cosmo is looking forward to visiting the Music City for a double-duty role in this weekend’s Big Machine Music City Grand Prix on the streets of Nashville.

Cosmo will drive the No. 89 3-Dimensional Services Group Ford Mustang in the 46-lap TA2 race for Peterson Racing in his second start in the Trans Am Series by Pirelli, in addition to coaching defending Nashville class winner Chris Cagnazzi in a pair of GT America powered by AWS races.

“Nashville is going to be exciting,” Cosmo said. “I wasn’t there last year, but I heard it was a great event. I’m really excited to have another go with Peterson Racing in TA2. I had so much fun with the team and racing with the competition in my debut at Mid-Ohio last month, it’s been buzzing with me since. And to do it on the streets of downtown Nashville at the Music City GP is going to be intense. I love street circuits and haven’t been on any since my days in the American Le Mans Series in the GTLM and LMP2 categories. I had a few victories on them back then, so I’m certainly ready for another.”

Cosmo made his TA2 debut for Peterson Racing at Mid-Ohio in June, qualifying fourth and finishing a competitive fifth in a race halted twice for crashes and eventually ending under the red flag.

“I had a great experience racing TA2 at Mid-Ohio,” Cosmo said. “The competition is strong. A lot of the guys in the series participated at Nashville last year, so they have a leg up on me in terms of track knowledge, but that’s never held me back. I learn tracks quickly, and I’m excited to get back into those cars and mix it up with everybody. There are a lot of TA2 cars, so qualifying will be really important.

“The Peterson Racing crew is a smart bunch and we will be looking for nothing short of a victory with our 3Dimensional Services Group Ford Mustang in front of the massive crowds in Nashville,” Cosmo added.

Cosmo regularly co-drives with Cagnazzi in Pirelli GT4 America. While SRO’s lead division gets the weekend off, Cagnazzi returns to the wheel of the No. 39 Cameron Racing Presidio /Hero Life Mercedes-AMG GT4 in a pair of GT America races. His best result of the season was second in the Sunday race at Sonoma Raceway.

Cagnazzi is the defending winner of the GT4 class at Nashville, winning last year in only his third weekend of SRO competition in a Mercedes-AMG fielded by RENNtech Motorsports. TA2 qualifying will be held at 10:10 a.m. Saturday morning (all times ET), with the race starting at 1:30 p.m. The opening GT America race will be Saturday evening at 8:25 p.m., with race two Sunday morning at 11:55 a.m.