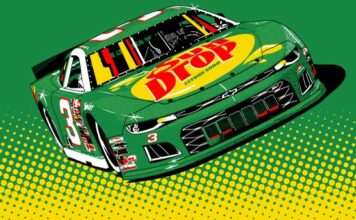 MOORESVILLE, N.C. (Aug. 2, 2022) – It’s official. Dale Earnhardt Jr. will be among the late model competitors at North Wilkesboro Speedway later this month. Today, the NASCAR Hall of Famer confirmed he’ll race a JR Motorsports entry in CARS Tour action during North Wilkesboro’s Racetrack Revival on Wednesday, Aug. 31. And he’ll do it with a familiar number and partner, dusting off the famed No. 3 and reuniting with iconic soda Sun Drop for the event.

Sun Drop’s recognizable green and yellow paint scheme is a tribute to the late model Earnhardt Jr. drove at North Wilkesboro in 1993. The then-18-year-old racer wheeled a Sun Drop-branded car in a dozen races that year. The 2022 version of the No. 3 Chevrolet provides a perfect dose of nostalgia for North Wilkesboro’s long-anticipated return.

“I came to North Wilkesboro so many times as a kid,” Earnhardt Jr. said. “It’s a special place. I never thought I’d get a chance to race around here again. To put this program together with Sun Drop, who sponsored my late model in ’93, I wouldn’t want it any other way. They were with my dad for years and one of my first sponsors. Seeing the Sun Drop Chevy at Wilkesboro again will bring back some great memories for me.”

The Earnhardt family’s connection to Sun Drop, owned by Keurig Dr Pepper out of Frisco, Texas, dates back to 1989 when the citrus-flavored brand first partnered with Earnhardt Sr. It quickly became a fan-favorite combination that coupled the elder Earnhardt’s on-track success with Sun Drop’s regional popularity in the southeast. Now, the six varieties of Sun Drop are available nationwide.

Dirty Mo Media will be on hand to document the historic event, with plans to produce a deeply personal video series called Roots & Revival that will capture Earnhardt Jr.’s journey leading up to, and including, the North Wilkesboro CARS Tour race. The six-part series will be featured exclusively on Dirty Mo Media’s YouTube channel on Tuesday, Aug. 9.

Additionally, fans can look for a special line of Earnhardt Jr. throwback merchandise to commemorate the revival of the Sun Drop partnership.

Earnhardt Jr. joins teammate Carson Kvapil in the No. 8 Chevrolet to round out JRM’s two-car lineup for the event. The CARS Tour race from historic North Wilkesboro is part of three series competing on Wednesday, Aug. 31. The green flag drops at approximately 7:30 p.m. ET with the race broadcast available on racingamerica.tv and racexr.plus.

ABOUT SUNDROP:
There’s a reason they say that Sun Drop citrus soda is like a giant pipeline of refreshment channeled directly to you. Once you get a taste of that unique lemon, lime and orange citrus combo, your taste buds won’t know what hit them! Sun Drop was first invented in 1928 but was reformulated in 1949 by Charles Lazier with the addition of caffeine. That was a game-changer that transformed the delicious drink into a citrus force of nature that people can’t get enough of. You get the thirst-quenching flavor with the tanginess of lemon and lime, the sweetness of orange plus that extra kick of caffeine to keep you going all day long.