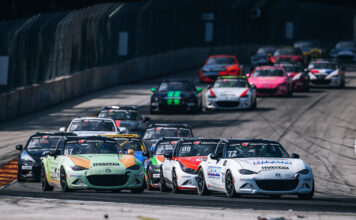 ELKHART LAKE, Wis. (August 5, 2022) – The 2023 Idemitsu Mazda MX-5 Cup presented by BFGoodrich® Tires schedule was unveiled Friday at IMSA’s State of the Sport presentation, and the growing championship is set for another season of big events at outstanding tracks. Mazda’s signature spec series will continue to hold a 14-race championship over seven events starting in January at Daytona International Raceway and ending in October at Michelin Raceway Road Atlanta.

The 2023 Mazda MX-5 Cup season keeps a good thing going, with limited changes from the current schedule. The season begins in Florida, first at Daytona International Raceway in January and then to the streets of St. Petersburg in March. Storied road courses Watkins Glen International, Road America, VIRginia International Raceway and Michelin Raceway Road Atlanta are all back on their traditional IMSA dates. This does leave one TBA, which will be revealed in the near future.

“We’ve listened to our competitors and our fans and believe we’ve assembled a desirable mix of venues,” said Mazda Motorsports Program Manager Jonathan Applegate. “The consistency will only help our teams and staff put on the best racing possible. Our partnership with IMSA continues to be mutually beneficial and is the perfect stage for MX-5 Cup racing. While it’s not ideal to put out a schedule with a TBA on it, we want our teams to have plenty of time to prepare for 2023.”

Operated by Andersen Promotions since 2017, MX-5 Cup will maintain the traditional doubleheader format with two 45-minute races at each event.

*all events are doubleheaders