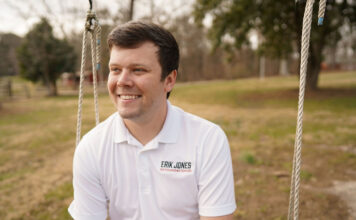 $20,000 Raised by 3 Reasons to Race Event in May at Birch Run Speedway Benefits Largest Independent Organization Devoted to Melanoma

BROOKLYN, Mich. (Aug. 7, 2022) – It was a year ago when NASCAR Cup Series driver Erik Jones launched his own charitable foundation in his home state of Michigan. Today, with Jones back in the Great Lake State to race at Michigan International Speedway in the FireKeepers Casino 400, the Erik Jones Foundation proudly made a $20,000 donation to the Melanoma Research Foundation (MRF), the largest independent organization devoted to melanoma.

“In February of 2016, my dad was diagnosed with metastatic melanoma, and four months later he was gone,” said the 26-year-old Jones. “Even with radiation and immunotherapy, the cancer spread. It was pretty aggressive. And what I’ve learned since then is how important early detection is, because the sooner you diagnose it, the more options you have for treatment.

“That’s how I got to know the Melanoma Research Foundation. They’re committed to supporting the medical research necessary to develop effective treatments and, ideally, a cure for melanoma. They also advocate for the melanoma community and educate patients, caregivers, and the general public about prevention, awareness, diagnosis and treatment. It’s a cause that’s pretty important to me, so when we had our first fundraiser, I wanted the MRF to be the beneficiary.”

On May 19 at Birch Run (Mich.) Speedway, located 40 miles north from Jones’ hometown of Byron, the Erik Jones Foundation held its first fundraising event, 3 Reasons to Race. Through a unique race-gaming experience where guests could win cash and prizes, along with a 50/50 raffle and silent auction that featured mementos from NASCAR personalities, $20,000 was raised for MRF to support mission critical research and educational resources.

Cheryl Stratos, an MRF board member and stage four melanoma survivor, accepted the check from the Erik Jones Foundation.

“It cannot be overstated how important donations like this one from the Erik Jones Foundation are to life-saving research and drug development,” said Stratos, who received her diagnosis in November 2009. “I am here today because of the work of so many people. I enrolled in a phase one clinical trial at UCLA and it saved my life. But the amount of money and work it takes to even have a clinical trial is staggering. That’s why this donation, and this moment, where Erik and I can advocate for prevention, early cancer detection and care, is so valuable. There’s someone today who is in the same position I was back in 2009 who will benefit from the efforts made by Erik and his foundation with this donation to the MRF.”

Committed to the support of medical research and education, MRF is a dedicated advocate for the melanoma community, helping to raise awareness of this disease and the need for a cure. MRF’s website, www.melanoma.org, is the premier source for melanoma information. MRF can also be found on Facebook, Twitter, Instagram, YouTube and TikTok.

In addition to raising funds for MRF, Jones has raised awareness. During this year’s Coca-Cola 600 on Memorial Day weekend at Charlotte (N.C.) Motor Speedway, Jones partnered with MRF and local dermatologists to promote sunscreen use. Before racing his No. 43 FOCUSfactor Chevrolet Camaro for Petty GMS, which sports an Erik Jones Foundation logo this weekend at Michigan to commemorate its one-year anniversary, Jones joined members of his foundation and distributed 10,000 travel-sized sunscreen containers to fans while encouraging them to schedule annual exams with their dermatologist.

“You can’t just talk about it, you have to go and do it,” Jones said. “That’s why I started the foundation. I wanted to find a way to do more on a larger scale. We’re only a year into it and I already feel like we’re making an impact. But the truth is, we’re just getting started.”

The foundation’s first gift was a donation last June to the Genesee District Library, a public library system with 19 locations serving the residents of Genesee County, Michigan. It was an extension of Jones’ #READwithErik series, which began in the spring of 2020 when COVID-19 forced NASCAR to take a 10-week break and schools transitioned to remote learning. Jones saw an opportunity to share his passion for reading and the first #READwithErik event took place on April 21, 2020 when he sat down in front of a camera and read Dr. Seuss’ iconic “Oh, The Places You’ll Go” via his Facebook page. Since its debut, #READwithErik has featured 70 books – 50 dedicated to youths with 20 other featured titles geared toward adults – all of which have generated more than 200,000 views and a reach in excess of 430,000.

In the past year as COVID-19 restrictions eased, Jones has been able to take his #READwithErik series from the digital realm to in-person gatherings. He has read to students in the campgrounds at NASCAR venues, with his first in-person reading coming last August at Michigan where Jones read “M is for Mitten: A Michigan Alphabet” by Annie Appleford, to kids and their families at the Graves Family Campground. Subsequent visits have included Estrella Vista STEM Academy for Engineering in Avondale, Arizona, last November, where the Erik Jones Foundation donated 100 books to the school library, and Celeste Henkel Elementary School in Statesville, North Carolina, earlier this year where Jones read another Dr. Seuss classic, “The Cat in the Hat”. Jones returned to an at-track campground event in May during the Southern 500 race weekend at Darlington (S.C.) Raceway, reading “Back Roads, Country Toads” by Devin Scillian and illustrated by Tim Bowers to kids and their families. Most recently, Jones joined author Neal Thompson on a panel hosted by North Carolina Humanities on June 23 at the NASCAR Hall of Fame in Charlotte, North Carolina, that discussed Thompson’s book, “Driving with the Devil: Southern Moonshine, Detroit Wheels and the Birth of NASCAR”.

Those wishing to make a tax-deductible contribution to the Erik Jones Foundation can do so via the following address: