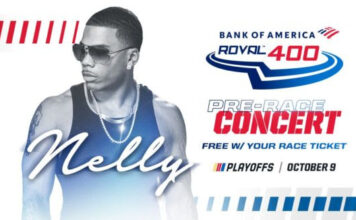 CONCORD, N.C. (AUG. 10, 2022) – Diamond-selling, multi-platinum, GRAMMY-winning rap superstar Nelly is set to rock the America’s Home for Racing with a high-energy pre-race concert before the Bank of America ROVAL™ 400 at Charlotte Motor Speedway on Sunday, Oct. 9. The rapper, actor, entrepreneur and philanthropist will also headline driver introductions ahead of the most anticipated race in the NASCAR Playoffs.

“I can’t wait to Rock the ROVAL and get fans revved up for an afternoon of NASCAR action,” Nelly said. “We’re bringing the party to Charlotte Motor Speedway and it’s going to be big!”

Nelly is scheduled to perform a 60-minute concert featuring a wide range of hits like No. 1s “Grillz,” “Dilemma,” “Hot in Herre” and “Shake Ya Tailfeather.” Following the concert, the entertainment kingpin will help set the stage for the pivotal NASCAR Playoff showdown, taking part in the pre-race driver introductions before the green flag falls on the Bank of America ROVAL™ 400.

The pre-race concert, which will take place on the infield of the innovative 2.28-mile ROVAL™, is free for fans with a Sunday Bank of America ROVAL™ 400 ticket. Fans can upgrade to a Track Pass for stage-front access to the concert and driver introductions.

Nelly burst onto the music scene with his 2000 debut album “Country Grammer,” producing hit after hit for more than two decades. His most recent music was released last year with his eighth studio album “Heartland.” The music mogul has also found success on the silver screen – starring in Adam Sandler and Chris Rock’s “The Longest Yard,” as well as a recurring role on “CSI: New York,” and a cameo on “90210,” among other on-screen roles. No stranger to the sports world, Nelly owns a stake in the Charlotte Hornets NBA franchise and has appeared as a panelist on the sports talk show “Skip and Shannon: Undisputed.”

More details on additional weekend entertainment and attractions will be forthcoming.

Adult tickets to the Bank of America ROVAL™ 400 on Sunday, Oct. 9, start at just $49. Kids 12 and under get in for just $10. Fans can upgrade their race-day experience with Track Pass, including stage-front access for the Nelly pre-race concert, driver introductions and more, for just $75. For tickets, upgrades, schedule information, camping and more, visit www.charlottemotorspeedway.com.