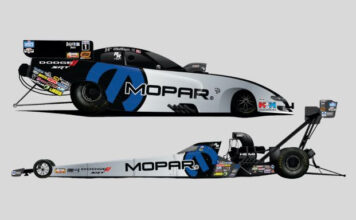 ● The Menards NHRA Nationals presented by PetArmor at Heartland Motorsports Park in Topeka, Kansas, marks the 14th event on the NHRA Camping World Drag Racing Series’ 22-race calendar. Tony Stewart Racing (TSR) brings its two fulltime entries – one in Top Fuel for 10-time event winner Leah Pruett and one in Funny Car for three-time Funny Car champion Matt Hagan – to the third-to-last race of the regular season before the Countdown to the Championship begins Sept. 15-18 with the Pep Boys NHRA Nationals at Maple Grove Raceway in Mohnton, Pennsylvania.

● After the 16th and final regular-season event on Sept. 5 with the Dodge Power Brokers U.S. Nationals at Indianapolis Raceway Park, the top-10 drivers in the standings of each of the four professional categories of the NHRA Camping World Drag Racing Series – Top Fuel, Funny Car, Pro Stock and Pro Stock Motorcycle – qualify for the Countdown to the Championship. The top-10 drivers in each class then compete in the final, six-race playoffs to vie for the title. Coming into Topeka, Pruett is sixth in the Top Fuel championship standings, 410 points behind leader Brittany Force with a 100-point margin over 11th-place Tony Schumacher. Hagan, meanwhile, is second in the Funny Car championship standings, 228 points behind leader Robert Hight with a 582-point advantage over 11th-place Chad Green.

● Mopar 85th Anniversary will be featured on Pruett’s Top Fuel dragster and on Hagan’s Dodge Charger SRT Hellcat Funny Car this weekend at Topeka, as well as during next weekend’s NHRA Nationals at Brainerd (Minn.) International Raceway. A simple combination of the words MOtor and PARts, Mopar offers exceptional service, parts and customer-care. Born in 1937 as the name of a line of antifreeze products, Mopar has evolved over 85 years to represent both complete vehicle care and authentic performance for owners and enthusiasts worldwide. Mopar made its mark in the 1960s during the muscle-car era with performance parts to enhance speed and handling for both on-road and racing use. Later, Mopar expanded to include technical service and customer support and, today, integrates service, parts and customer-care operations in order to enhance customer and dealer support worldwide. Complete information on Mopar is available at www.mopar.com.

● Pruett first joined forces with Dodge//SRT and Mopar in 2016, while Dodge//SRT and Mopar have supported Hagan since his rookie season in 2009. However, TSR’s ties to Mopar go back even further. Its roots are in sprint car racing, with Mopar powering multiple TSR entries in USAC and the World of Outlaws Sprint Car Series from 2001 through 2007. Seven of TSR’s 27 open-wheel championships were won with Mopar.

● The Menards NHRA Nationals will serve as Pruett’s 185th career Top Fuel start and her eighth at Topeka. For Hagan, this will be his 307th career Funny Car start and his 13th at Topeka.

● Pruett is eyeing her first victory in the Menards NHRA Nationals while also seeking her first No. 1 qualifier at the event. Pruett’s best result came in 2017 when she qualified second and lost to Antron Brown in the semifinals. In 2021, Pruett drove a Dodge Challenger Drag Pak to the final round in the NHRA Factory Stock Showdown before losing to John Cerbone.

● From 10 a.m. to 12 p.m. CDT on Friday, Pruett and Hagan will attend an open house at WELD headquarters in Kansas City. For more than 55 years, WELD has built technologically superior wheels specifically for drag racing and other motorsports series. It continues the tradition of building racing and performance street wheels utilizing the latest technology, top-quality craftsmanship and excellent customer service to teams and drivers. The roots of WELD are firmly planted in drag racing. The company actively developed wheels at its local dragstrip and even owned the facility for a number of years, such was its commitment to ongoing development. The WELD engineering team continues to develop race wheels specifically to meet the demands of individual drag strips in the NHRA Camping World Drag Racing Series. The unique specifications support the fastest racing series in the world, which continues to serve as the ultimate proving ground for WELD wheel technology. This is the same technology that WELD has applied to its range of street wheels that anyone can fit to their personal vehicles. For more information, please visit www.weldwheels.com.

● DYK? When Heartland Motorsports Park opened in 1989, it was the first new auto racing facility to be built in the United States in 20 years. Located on the south side of Topeka, the facility covers approximately 650 acres and includes an NHRA-sanctioned quarter-mile drag strip, a 2.5-mile road course with four different configurations, a 22-acre asphalt pad for autocross and drift events, and a motocross track.

You completed nine out of a possible 12 rounds during the NHRA’s Western Swing, a run highlighted by a July 17 win in the Dodge Power Brokers Mile-High Nationals at Bandimere Speedway near Denver, Colorado. Now that you’ve had a week off to reflect on your team’s recent success, what is your confidence level heading into Topeka?

“The confidence really comes from the situational improvements we were able to identify and act on during the Western Swing, from preparation of going rounds, to a strong revaluation in our clutch program, to my driving style as the long days progressed. We’ve said all along that we need more runs to learn more, to gain stride, and we were able to do that through the Western Swing.”

With three races remaining prior to the Countdown, are there some specific things you want to achieve in Topeka?

“Our focus is heavier toward qualifying position than it has been all year because we’re operating in a space where we can confidently work to improve our times, as opposed to making A-to-B runs. Strengthening our position in the points to the top-five is high on our priority list.”

You’re running a special scheme at Topeka commemorating Mopar’s 85th anniversary. Talk about your history with Mopar and what it means to represent such a significant milestone for the brand.

“Eighty-five years is a long time, especially in the automotive space. For Mopar to continue their dedication toward increased performance for their customers for so many years, and only getting stronger, makes me extremely proud to carry on the Mopar legacy. It’s not like it is just another birthday of company existence, this year is truly a landmark in time for Mopar with the Power Brokers dealership program and the re-launch of Direct Connection. Happy Birthday Mopar! We’ll be working hard to bring home the gold for you in Topeka!”

Even though you had some challenging runs during the Western Swing, you remain second in the Funny Car championship. Did the off-weekend after the Western Swing provide an opportunity to hit a reset button prior to hitting the track again this weekend at Topeka?

“I think Topeka will be our turning point after three first-round losses during the Western Swing and turn it into something positive. Topeka has always been a fast track for me before. I’ve set world records there and done well there. I feel like if there’s any race we can turn the curve, it’s there. The three losses out west are very uncharacteristic for our team and what we can accomplish. We had some tough decisions to make out there and the car kept dropping cylinders. We’re going to go back to what we were doing last year as far as the fuel system goes. I believe in Dickie Venables (crew chief). I believe in Mike Knudsen (co-crew chief), Alex Conaway (car chief) and all of our guys. I know if anyone can turn this thing around, it’s them. They’re smart individuals who are very passionate about what they do. I’m going to go up there and do my job on the starting line and on the track and bring 100 percent. I know my team will bring 100 percent, too. When things come together and click, we’re unstoppable. I think Topeka will be our race to get things back on track for the Countdown.”

Which track is Topeka most similar to in regard to the adjustments the crew will have to make to the car?

“Topeka is a unique track because it’s usually always hot there. It was 105 degrees when I looked last week. It’s a race where you never know what you’re going to get, but the racing surface itself is great. If the clouds come in or a storm pops up, we’ve been able to run really fast. The crew has to be ready for some throwdown sessions, but also some of those hot, greasy track conditions we’ve struggled with a bit, so I think we’re going to have to reel it in. It’s looking like it’ll be warm, so we’ll have to bring our hot weather tune-up and see what we can do out there.”

You’re running a special scheme at Topeka commemorating Mopar’s 85th anniversary. Talk about your history with Mopar and what it means to represent such a significant milestone for the brand.

“I’ve been with Mopar for a long time. To be able to carry their banner for so many years has been incredible. I’ve gained a lot of fans from Mopar, Dodge and SRT. Being able to run this one-off scheme for Mopar’s 85th anniversary is amazing. It’s a huge milestone and a huge part of my career. They’ve been there to support me throughout three championships. I’m extremely proud to represent the special scheme these next two weekends. It’s always great showing Mopar and Dodge some love. These next two races are all about Mopar and we want to bring them two good finishes to get back on top of where we need to be before the Countdown.”