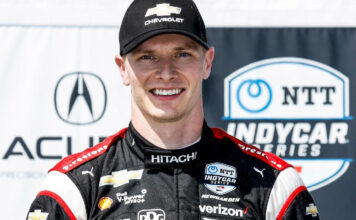 DETROIT (Sept. 8, 2022) – As the 2022 NTT INDYCAR Series (NICS) season roars to a close at WeatherTech Raceway Laguna Seca (WTLS) on Sunday, three Team Chevy drivers are among the five that are mathematically eligible to win the INDYCAR Championship and take home the Astor Cup.

Will Power, No.12 Verizon 5G Team Penske Chevrolet, heads to the Firestone Grand Prix of Monterey season finale as the points leader with 523 points. Power led the standings twice earlier in the season and retook the top spot after Race 13 (Indianapolis road course-July 30). He has one win, four poles and 11 top-five finishes (the latter two are most in INDYCAR this year).

Teammate Josef Newgarden, No. 2 Hitachi Team Penske Chevrolet, is tied for second, 20 points down to Power, and holds the tiebreaker with five wins (most in INDYCAR this year). He also has one pole and seven top-five finishes.

Sitting fifth is Scott McLaughlin, No. 3 XPEL Team Penske Chevrolet, fresh off his convincing win at Portland and the announcement of a contract extension. He is 41 points behind Power and has recorded three wins, three poles and eight top-five finishes.

A total of 54 points is available Sunday: 50 points for the race win, one point each for pole position and leading one lap, plus two points for leading the most laps in the 95-lap race around the 2.238-mile, 11-turn road course.

“To have five drivers vying for the championship, three of which are Chevy-powered, going into the final race of the INDYCAR season is remarkable,” said Rob Buckner, Chevrolet program manager for the NTT INDYCAR Series. “With 11 wins in 16 races, I am extremely proud of the effort put forth by our teams, the Chevrolet engineers and Ilmor, our engine partner. We had our challenges from time to time, but everyone pulled together and moved forward. And here we are … poised for a final run for the title times three.

“We feel well-prepared for Sunday’s race at Laguna Seca to support not only our title-contending teams, but all of our Bowtie teams as they engage in the final 95-lap battle of the season. Good luck to Will, Josef and Scott as they all drive to cap off their season off by winning the Astor Cup.”

· Points leader Power has one previous podium at WTLS (second in 2019).

· Newgarden was crowned the 2019 NTCS champion at WTLS without winning the race (eighth in 2019).

· 1: Chevrolet’s position in the INDYCAR Engine Manufacturer standings after 16 races

· 6: Different Chevrolet drivers to win races dating to the start of 2020. Scott McLaughlin was the most recent at St. Petersburg

· 42: Pole starts by Will Power since 2012 in a Chevrolet-powered car, most of any driver