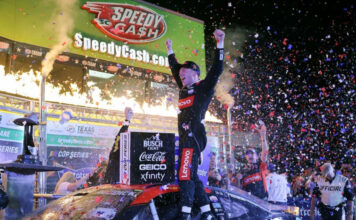 Reddick led the final 24 laps en route to a 1.19-second victory over playoff contender Joey Logano. The win was his third of the season and his career, but first on an oval in the No. 8 Chevrolet. Reddick’s wins earlier this season came at Road America and the Indianapolis Motor Speedway road course.

Reddick, who fell two points of advancing into this second round of the playoffs, continued the streak of a non-playoff driver winning that began in the opening three-race Round of 16. He followed Erik Jones (Darlington), Bubba Wallace (Kansas) and Chris Buescher (Bristol) in continuing the role of spoilers in the NASCAR Cup Series Playoffs.
“This will make that, the pain of not making it through, a little bit easier,” said Reddick, who also won the NASCAR Xfinity Series race at Texas Motor Speedway in May. “Even though, yes, it (this win) would have locked us into the Round of 8. We’re winning races. That’s what we’ll keep trying to do.
“This is a tough race, 500 miles here. Not an easy feat. … So great to be able to win here in a Cup car. Been close a few times. Let’s go!”
Logano paced six playoff drivers among the top-10 finishers, including three among the top five with Team Penske teammate Ryan Blaney taking fourth and Stewart-Haas Racing’s Chase Briscoe fifth. Non-playoff driver Justin Haley of Kaulig Racing equaled his season-best effort by finishing third.

Nine of the 12 playoff contenders finished among the top 15 while it was a devastating day for the trio of Christopher Bell, Chase Elliott and Alex Bowman in the opening race of the Round of 12. They all finished 29th or worse in the 36-car field and into an early hole in the three-race playoff segment.

Bowman had a costly early spin that he attempted to rebound from but could only manage a 29th-place finish. Elliott and Bell, who both dealt with tire issues that caused car damage and DNFs, finished 32nd and 34th, respectively.

In the opening 105-lap stage, Byron led 41 laps – tops among all drivers – but it was Larson who grabbed the stage win. Playoff drivers swept the top six positions in the stage as Larson was followed by Hamlin, Logano, Daniel Suarez, Ross Chastain and Byron, respectively.

The first playoff driver to incur trouble was Bowman, who was running eighth with eight to go in the stage but the single-car incident dropped him to 34th in the field. He was able to continue but finished five laps down and is last among the 12 remaining playoff drivers.

Elliott and Bell were the next contenders to find trouble, but their issues led to early race retirements. Bell, the only driver in the opening playoff round with top-five finishes in all three races, would not extend that streak at Texas. He was unable to overcome a pair of right-rear flat tires, the second of which caused major damage to his car and ended his day in 34th after completing 136 laps. Bell is 11th in the playoffs, 55 behind Logano.

Elliott, who had led a race-high 44 laps through the first 184 laps, was leading the race when he also had a right-rear tire go down and slammed into the Turn 4 wall. His race was over and would finish 32nd. He currently is on the bubble in the eighth position among the playoff drivers, 26 back of Logano.

A red flag shortly thereafter due to light rain and lightning in the area would shut down the on-track action. The race was resumed after a 56-minute delay with 111 laps to go in the 334-lap event.

Reddick did not lead a lap nor gain any points in the first two stages, but he saved his best for last. He led for a 17-lap stint following the delay and then again on Lap 281 when he inherited the lead from Ricky Stenhouse Jr., who lost control of his car, hitting the backstretch wall and then clipping playoff driver Austin Cindric.

Reddick would go on to lead 53 of the final 54 laps and was never threatened for the win.

The NASCAR Cup Series Round of 12 segment continues next week at Talladega (Oct. 2) and then onto the Charlotte ROVAL (Oct. 9).

NOTEBOOK: Sunday’s Autotrader EchoPark Automotive 500 broke track records for lead changes (36), most leaders (19), cautions (16), caution laps (91) and longest race (4 hours, 21 minutes, 53 seconds). The previous marks were 33 lead changes (set in 2010 fall race), 17 leaders (2000), 13 cautions (2014 fall race), 73 caution laps (1997) and longest race at four hours, 17 seconds (1997). … Kyle Busch recorded his first DNF in 32 NASCAR Cup Series starts at Texas Motor Speedway when the Joe Gibbs Racing driver exited the Autotrader EchoPark Automotive 500 after completing 48 laps due to a single-car accident. He finished last in the 36-car field. … Three drivers – rookie Harrison Burton (15), Ross Chastain (1) and BJ McLeod (1) – led their first career Cup Series laps at Texas Motor Speedway in Sunday’s race. … Top Gun: Maverick co-star Manny Ramirez (Lt. Mickey “Fanboy” Garcia) served as the Honorary Starter and waved the green flag for the start of the Autotrader EchoPark Automotive 500. Fellow co-stars Jay Ellis (Lt. Reuben “Payback” Fitch) and Lewis Pullman (Lt. Robert “Bob” Floyd) were the co-Grand Marshals and delivered the command to the field. … Following the May 24 tragedy at Robb Elementary School in Uvalde, Texas, Big Brothers Big Sisters of South Texas went to work to support those impacted in the community. They are committed to serve as an anchor in the community and have launched a permanent affiliate in Uvalde that will allow them to provide the much-needed mentorship and mental health support systems for the impacted youth. To show public support for the Uvalde community as they continue to grieve and recover from the tragedy, Big Brothers Big Sisters of America (BBBSA) teamed up with Uvalde community leaders to host the “Uvalde Strong/Rise Up Weekend” for the NASCAR Playoffs doubleheader at TMS. The purpose of the weekend was to provide an organized distraction and unique experience for the families, approximately 130 people in all, who lost loved ones as a result of the shooting. BBBSA has also invited a variety of guests, including NASCAR personalities, former NFL football players, and BBBS staff and health counselors to join the families to cheer on their favorite drivers. The families watched both Saturday’s NASCAR Xfinity Series race and Sunday’s Cup Series race from two suites overlooking the action. The speedway also hosted a dinner Saturday evening in the Lone Star Condominium Clubhouse just outside Turn 2 of the facility.