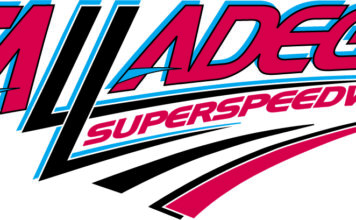 Three events over the course of two days are scheduled to take place on Saturday and Sunday at Talladega Superspeedway with all three of NASCAR’s top series conducting playoff races. The NASCAR Camping World Truck Series and NASCAR XFINITY Series will run a doubleheader on Saturday afternoon with the NASCAR Cup Series set for a Sunday afternoon green flag.

ROUND OF 12 NCS PLAYOFF STANDINGS (Top 8 Advance After Charlotte)

FORD IN THE NASCAR CUP SERIES AT TALLADEGA

ROUND OF 12 NXS PLAYOFF STANDINGS (Top 8 Advance After Charlotte)

FORD IN THE NASCAR XFINITY SERIES AT TALLADEGA

ROUND OF 12 NCWTS PLAYOFF STANDINGS (Top 4 Advance After Homestead)

FORD IN THE NASCAR CAMPING WORLD TRUCK SERIES AT TALLADEGA

· Ford has 1 series wins at Talladega.
· That victory came in the inaugural series race when Mark Martin won in 2006.

Team Penske has won 9 of the last 16 NCS races at Talladega Superspeedway. Brad Keselowski started this run by winning in 2014 and registered four victories at the track before joining Roush Fenway Keselowski Racing this season. Joey Logano won in back-to-back seasons (2015-16) while Ryan Blaney has followed suit, winning twice in the last three years at Talladega.

TEAM PENSKE WINS AT TALLADEGA SINCE 2014

Brad Keselowski is the winningest active driver at Talladega with six NASCAR Cup Series victories and is tied for second on the all-time list with Dale Earnhardt Jr. and Jeff Gordon. The track’s all-time winner is Dale Earnhardt Sr., who won 10 times during his NASCAR Hall of Fame career.

The first time Ford went to victory lane at Talladega Superspeedway was May 4, 1975 when Buddy Baker, driving for Hall of Fame car owner Bud Moore, held off David Pearson on the final lap. The win was Baker’s ninth career victory and came after he took the lead with 18 laps to go. One of the key decisions in getting Baker to the checkered flag first came when his team opted for two tires on its final pit stop of the day while Pearson and the Wood Brothers decided on gas only. Even though Pearson steadily gained ground on the final lap, Baker was able to hold on by half a car length to win. That started a streak which saw Baker and Moore win three straight Talladega races.

Ford has had many milestone moments at Talladega Superspeedway, including the first NASCAR Cup Series win for the late Davey Allison, who won the Winston 500 on May 3, 1987. The race came down to a restart with 10 laps to go in which Allison found himself behind Dale Earnhardt in the outside lane. Earnhardt bolted to the lead when the green flew and Allison tucked in right behind him through turns one and two. As they came off the second corner, Allison went to the inside and easily passed Earnhardt for what proved to be the winning pass. Terry Labonte ended up finishing second with Earnhardt third. Allison went on to win 19 NCS races, including three at Talladega.

When Dale Jarrett won the UAW-Ford 500 on Oct. 2, 2005 it ended up being the final trip to victory lane for Robert Yates Racing. This race came down to a green-white-checker restart, where Jarrett was positioned fourth. He was still in that spot when they came around to start the final lap, but quickly moved to the outside as Tony Stewart grabbed the lead on the inside lane. The two drivers battled side-by-side down the backstretch before Jarrett powered his way in front. Seconds after getting the lead, Kyle Petty was involved in a single-car accident that brought out the caution as the cars entered turn three. Jarrett was declared the winner after NASCAR verified that he was in front at the time the yellow flag was thrown. The win was RYR’s 57th triumph in the NASCAR Cup Series, and came six years after the team won its only championship with Jarrett in 1999.