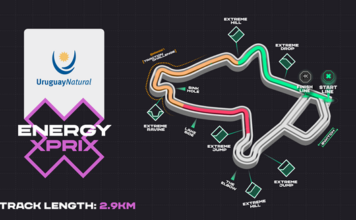 Extreme E has revealed its exciting final course ahead of the championship finale in Punta del Este, Uruguay.

24 November 2022, Uruguay: With each lap just under 3km long, the South American course will put our world class drivers to the test. The teams’ drivers will cover half the race length each, taking on changing gradients and undulations, high-speed corners and a number of overtaking opportunities.

It should prove to be a fitting setting for an exciting Extreme E season – with four teams still in the running to win this year’s championship.

Timo explains: “We have what I think is a very exciting starting area down to Waypoints 1 and 2. It is a wide open, slightly downhill slope into the first drop which will create some action. The good thing here is that we will have a side-by-side situation for up to five cars. Then, we enter the ditch and jumping out of that, the cars will likely still be next to each other.

“Entering Turn 1, a ninety-degree right hander, it looks easy but it is a grass field so you will notice that we have very slippery conditions, even though the track is dry. This will affect the driving lines and affect the cars significantly in terms of grip, so the drivers are going to have to work hard to manage that.

“The first sector is the fastest, so there we will see who can adapt quickest to the track conditions in that area. I expect plenty of track evolution as the drivers run lines into the course and form ruts, so they will have to hit the line perfectly otherwise they will have to fight hard to recover. I also expect next to the line it will remain very slippery so we will likely see the cars sliding all over the place.

“The following sector is a more technical part, so the drivers have to hit the brakes and get the rotation right to position the car well to get through the intricate corners.

“Then the drivers enter the midfield straight which includes a nice spot for the ENOWA Hyperdrive. Here the drivers exit the straight, which is an overtaking opportunity, into what feels like a nearly 180-degree right hand corner. This leads into a high-speed jump, where the car runs smoothly before coming back into another technical area with uphill and downhill spots. A tight left-hander follows as the drivers prepare for a final jump that guides them either into the Switch Zone or across the finish line.

“Looking at the course overall, especially with the championship picture in mind, lap times will be super tight and to adapt driving styles and adapt the cars will be a pretty big challenge.

“It is tricky to be consistently quick and hit the right line all the time here, and that’s something which is made more difficult the more cars you have around you.”

As usual, each driver will get a chance to deploy their ENOWA Hyperdrive as tactically as possible as they all look to get an edge out on course.

Meanwhile, the Continental Traction Challenge will be as crucial as ever. Running from Way Point 5 to Way Point 13, being quickest through this section over the weekend will be absolutely pivotal with five extra points up grabs, especially so for the series’ four title contenders this weekend.

You can watch the Extreme E Season 2 title-decider in Punta del Este this weekend (26-27 November) and find out where you can catch all of the action here.