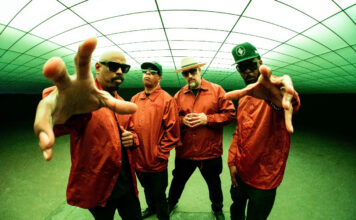 LOS ANGELES (Dec. 4, 2022) – If the roar of the engines won’t make NASCAR fans “Insane in the Brain” on Sunday, Feb. 5, a group of hip-hop legends from South Gate will put them over the edge.

NASCAR announced today that Cypress Hill will perform during the 2023 Busch Light Clash at the Coliseum. They will take the stage after the last-chance qualifiers and before the main event inside the iconic Los Angeles Memorial Coliseum. FOX will also air one of their songs live on the national broadcast, as NASCAR celebrates the beginning of its historic 75th anniversary season with an exhibition for the ages in the heart of Los Angeles.

“What a tremendous addition to the 2023 Busch Light Clash,” said Ben Kennedy, NASCAR’s senior vice president for racing development and strategy. “Cypress Hill are cultural icons, not only in Los Angeles but around the world. We can’t wait for them to perform for our fans during this historic event.”

Naming themselves after a local street in Los Angeles, Cypress Hill burst on the scene in 1991 with the release of their self-titled debut album. They followed that up with Black Sunday in the summer of 1993, which debuted at No. 1 on Billboard’s Top 200, garnered three GRAMMY® Award nominations and went triple platinum in the U.S. As a result, Cypress Hill became the first rap group to have two albums in the top 10 of the Billboard 200 charts at the same time and are the first Latino-American hip-hop group to achieve platinum and multi-platinum success.

Since the release of Black Sunday, Cypress Hill have released seven more albums and made history once again in 2019 when the group was honored with their very own star on the Hollywood Walk of Fame. Their music continues to entertain and inspire audiences worldwide, and the documentary “Insane in the Brain” released on Showtime this year introduced the group to a new generation.

“NASCAR drivers have the mentality of taking it to the limit on every lap, and we take the same approach with our music,” said Cypress Hill co-founder Sen Dog. “We’re excited to have NASCAR return to our back yard, and we look forward to bringing some South Gate style to all of the NASCAR fans at the LA Coliseum.”

Additional Busch Light Clash performers will be announced in the coming weeks, as NASCAR prepares for the highly anticipated sequel to one of the most celebrated events in NASCAR history. The inaugural 2022 event featured performances by international superstars Ice Cube, Pitbull and DJ Skee.

Yet it’s the racing that makes the Busch Light Clash at the Coliseum the most unique event on the NASCAR schedule. The 2023 season-opening exhibition will once again feature the stars of the NASCAR Cup Series competing on a temporary, quarter-mile asphalt track nestled inside the Los Angeles Memorial Coliseum. Joey Logano won the inaugural event earlier this year en route to winning the 2022 NASCAR Cup Series championship.

Tickets for the 2023 Busch Light Clash at the Coliseum begin at $65, and kids 12-and-under are $10. Those are the same prices charged for this year’s inaugural showcase. Fans are encouraged to get their tickets now while supplies last by visiting www.nascarclash.com.

Groundbreaking for track construction is set for Dec. 15.

The Los Angeles Memorial Coliseum, a living memorial to all who served in the U.S. Armed Forces during World War I, has been a civic treasure for generations of Angelenos. Located in the Exposition Park neighborhood of Los Angeles, CA, the Coliseum is a 77,500 capacity multi-purpose stadium which opened in 1923. Home to the USC Trojans, the legendary stadium has been named as one of the nation’s 40 best stadiums to experience college football by Sporting News, and ranked USC football at the Coliseum as the nation’s No. 3 stadium experience by StadiumJourney.com. Following a recent renovation in 2019, the stadium is now home to a newly added seven-story suite and press tower which includes luxurious suites, loge boxes, club seats, a new press box, and the rooftop 1923 Club with a 360-degree view of the Los Angeles basin; along with several upgrades including new seating, updated technology and concession stands, additional food options for guests, and much more.

The legacy of events and individuals hosted in nine-plus-decades reads like no other, including the only venue to host two Opening and Closing Ceremonies, and the Track and Field Competition for the Summer Olympics (Xth Olympiad in 1932, XXIIIrd Olympiad in 1984) and soon a third (XXXIVth Olympiad in 2028); home to college football’s USC Trojans since 1923 and the UCLA Bruins (1928-1981); professional football’s Los Angeles Rams (1946-1979 and 2016-2019); appearances by U.S. Presidents Franklin D Roosevelt, Dwight Eisenhower, John F. Kennedy, Lyndon Johnson, Richard Nixon, and Ronald Reagan; and international dignitaries such as Martin Luther King, Jr., Cesar Chavez, Pope John Paul II, the Dalai Lama, and Nelson Mandela, to name a few. Additionally, the Coliseum, designated a National Historic monument in 1984, has hosted some of the greatest acts in entertainment, including Bruce Springsteen, The Rolling Stones, Pink Floyd, Prince, and many more. For more information please visit lacoliseum.com.