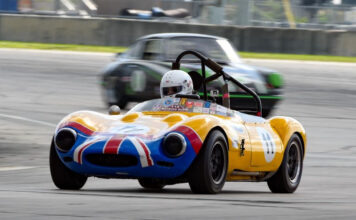 SEBRING, Florida (December 3, 2022) – The 2022 Historic Sportscar Racing (HSR) Classic Sebring 12 Hour is underway at Sebring International where four different Run Groups of vintage and historic sports cars from the last 60-plus years will compete in a non-stop rotation of races until Midnight EST. The overall HSR Classic 12 Hour winners will be determined after a fourth and final round for all four Run Groups beginning at 11 a.m. EST on Sunday.

Officially titled the HSR Classic Sebring 12 Hour, Pistons and Props, presented by the Alan Jay Automotive Network, the five-day celebration features historic and vintage sports car racing and a “fly-in,” parade and weekend display of military and civilian aircraft from the last half century and WWII.

The HSR Classic Sebring is a tribute race to the legendary 12 Hours of Sebring and the facility’s rich aviation history. Hendricks Field was a civil and military air field on which the famous 12-hour sports car race has been run for nearly 70 years.

The schedule through Friday also featured the HSR Sebring Historics that was the finale for HSR’s season-long series and championships. Yesterday’s Sebring Historics big winners included a pair of Prototype-class teammates that swept this year’s B.R.M. Chronographes Endurance Challenge races at Sebring and a Porsche driver who has stayed perfect on the Sebring weekend so far with three-straight feature race victories.

The Sasco Sports International-class winner was Hervey Parke in his 1965 No. 11 Ginetta G4 (pictured at top) prepared by Michael’s Vintage Racing.

A Friday highlight was the third place overall and second-place Prototype-class finish in the B.R.M. Endurance Challenge race by 78-year-old teammates Travis Engen and Divina Galica in Engen’s GMT Racing 2005 No. 2 Audi R8 LMP. Engen is an HSR fixture and regular winner in the pristine Audi LMP, but Galica was making her first race start and podium appearance since last competing at Sebring in 2008.

An English-born multi-sport athlete who is a Member of the Order of the British Empire (MBE), Galica is a four-time Olympian in skiing competition who twice served as Captain of the British Women’s Olympic Ski Team. Her skiing popularity led to a celebrity race invite at Oulton Park where her knack for speed – she had briefly held the downhill ski speed record at 125 mph – quicky transferred to four-wheel competition and a career on and off the track for which she is best known here in the U.S.

Galica drove everything from Formula 1 to Formula Renault, Formula Vauxhall Lotus, Formula 2 and more, but she also excelled in the business side of motorsports in management positions with Skip Barber Racing and iRacing.com and instructing for the Bertil Roos Racing School.

Another Friday feature was the Vintage Plane Arrival and Parade to the Sebring International Raceway paddock where this year’s lineup of classic and WWII era planes will be on display through Sunday morning.

A locally-based classic plane making its Classic Sebring debut is the immaculate 1931 Stearman 4CM-1 Junior Speedmail (No. 4036) from the Alan Jay Automotive Network and piloted and co-owned by Al DiGiulio. A true “barn find,” the Stearman was taken out of service after a landing accident in 1933 just two years after it was manufactured in Wichita, Kansas by the Stearman Aircraft Corporation.

Stored in a barn for nearly the next 50 years, the damaged and disassembled plane was sold in 1982 and included the landing gear, tail, damaged fuselage and the all-important data plate. Ownership changed hands over the next 20 years before a certificate or airworthiness was issued with tail number NC488W in 2004. The first post-restoration flight – and the first for the Stearman since 1933 – took place in 2005 and NC488W was acquired by the Alan Jay organization and DiGiuilo just last year.

DiGiulio was at the controls during Friday’s traditional Parade of Planes from nearby Sebring Regional Airport to the HSR paddock and the VIP passenger in the Stearman was John Doonan, President of HSR parent company IMSA. Doonan hopped out of the plane after DiGiulio parked the Stearman among the other aircraft on display and immediately called his friend and close colleague Alan Jay Wildstein to thank him for the incredible experience. The Alan Jay Automotive Network is a longtime partner of Sebring International Raceway and has been the presenting sponsor of the HSR Sebring Classic 12 Hour, Pistons and Props, presented by the Alan Jay Automotive Networks since the race’s inaugural running in 2016.

Spectator tickets for the HSR Classic Sebring 12 Hour are available exclusively at the Sebring International Raceway ticket office at the main building throughout the event. Learn more at www.HSRtickets.com.