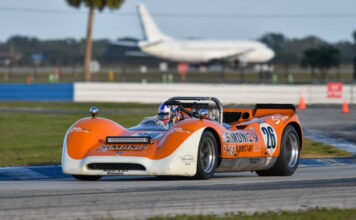 SEBRING, Florida (December 3, 2022) – Nighttime is the Right Time at the 2022 Historic Sportscar Racing (HSR) Classic Sebring 12 Hour where sundown has done little to slow the fast pace of the seventh running of the 12 Hours of Sebring tribute race that will see the competition continue until just before Midnight EST.

With all four Run Groups having completed their first two rounds just before 8 p.m. EST, leaders have emerged in all four Run Groups while some early contenders and defending winners have encountered trouble on the always challenging 3.74-mile Sebring International Raceway road course.

Marco Fumagalli has returned to the HSR Classic 12 for the first time since securing the Run Group A victory in 2019 and is halfway home to a second win in the 1969 No. 26 Lola T160 prepared by Waite-N-See Motorsports. Fumagalli has built a nearly 90-second lead over the second place 1968 No. 24 Chevron B8 of Till Bechtolsheimer. Fumagalli won Group A Round Two after Bechtolsheimer was first to the line in Round One.

Fumagalli will close out Saturday’s on-track schedule in the Lola but he and the Waite-N-See team may hand the T160 over to teammate Toni Seiler for Sunday’s fourth and final round. Seiler took the green flag in the Waite-N-See 1969 No. 20 Lola T165 only to slow with a mechanical failure just four laps in the opening Group A round. Seiler won the Classic 12 in Group A in 2018 driving a Lola T70.

Run Group B was a tight battle between a pair of Chevron teams that split the opening rounds. Ethan Shippert drove the Phil Reilly and Co. 1974 No. 29 Chevron B26 to the Round One victory and joined car owner/driver Gray Gregory and their co-driver Randy Buck in holding a 10-second lead at the halfway point over the Team Mean/KMW Motorsports 1978 No. 94 Chevron B23/36 of Ryan Harrold and Kevin Wheeler that won Round Two.

Ideal Motorsports teammates Matthew Miller and James French co-drove to victory in the B.R.M Endurance Challenge one-hour race on Friday but have moved closer to an even bigger endurance race prize with the Run Group C lead at the Classic 12’s halfway point. Miller and French have built a 45-second lead in the Ideal Motorsports 2014 No. 41 Oreca FLM09 Le Mans Prototype Challenge “PC” after sweeping both of the Group C opening rounds.

An all-family and all Kelly-Moss Road and Race (KMR) battle has emerged in Run Group D where father-and-son KMR teammates Brent Asplundh and Griffith Asplundh run one-two at the halfway point. Brent Asplundh won both opening rounds in the KMR 2015 No. 85 Porsche 991 Cup car and hit the halfway point a full two laps ahead of his son and nearest challenger Griffith Asplundh who wheels a KMR 2016 No. 087 Porsche Cayman GT4 Clubsport. The elder Asplundh swept three of four Group D rounds in the 2021 Classic 12 only to narrowly lose the overall victory, but his current two-lap cushion on the field has him in a much more comfortable position this year.

In addition to Seiler’s No. 20 Lola retiring early, other past HSR Classic 12 Hour winners encountered problems in the opening half. Reigning Run Group B winner Jim Farley finished a close second in his RM Motorsports 1978 No. 98 Lola T298 in Saturday’s opening race only to encounter electrical issues with the Lola during Round 2. The Lola lost its tail lights as darkness fell and was forced to the paddock for repairs. The delay cost Farley and the RM team a full eight laps but they are determined to press on in the second half of the race tonight and Sunday morning.

The schedule picks up again Sunday at 11 a.m. EST when the fourth and final segments for all Groups will be held in succession to bring the 2022 Classic Sebring 12 Hour at Sebring, Pistons and Props, presented by the Alan Jay Automotive Network, to a conclusion.

Spectator tickets for the HSR Classic Sebring 12 Hour are available exclusively at the Sebring International Raceway ticket office at the main building throughout the event. Learn more at www.HSRtickets.com.