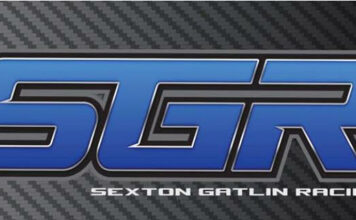 (Lakeside, CA, December 2, 2022) Nine months after it opened the season at the Imperial Valley Raceway, Sexton Gatlin Racing brought the curtain down on its 2022 campaign when Grant Sexton competed in the USAC West Coast Sprint Car Series portion of the 81st Turkey Night Grand Prix at the Ventura Raceway. The historic race was contested in front of a near-sellout crowd and watched by others around the world on the Flo Racing Network.

Dating back to 1934, the Turkey Night Grand Prix is the third oldest race in the United States, trailing only the Indianapolis 500 and the Pikes Peak Hill Climb. Some of the biggest names in USA racing have won Turkey Night including A.J. Foyt, Parnelli Jones, Tony Bettenhausen, Tony Stewart, and Kyle Larson. Just to say that a driver has competed in the Turkey Night Grand Prix is a feather in the racer’s cap and an honor. Sexton’s participation in the sprint car portion of this year’s race adds the SGR driver’s name to the long list of racers who have competed in the coveted event.

The Lakeside, California native’s first TNGP action came on Friday in a 10-lap heat. Starting on the outside of the front row, Sexton was third entering turn one on the first lap. He slipped back to fourth at the end of the opening circuit but racing on the track where he won the main event in his first-ever sprint car start, he raced back to third before the checkered flag. Not long thereafter, the 18-year-old came back onto the track known as “The Best Little Dirt Track In America” for his 12-lap qualifier. In that race, he started sixth. The 2021 POWRi Southwest Lightning Sprint Car champion advanced one spot forward to fifth on the second lap. He drove a smooth race the rest of the way and was still in fifth at the end.

The teenage racer gave a good account of himself all night by racing fast and smoothly against his more experienced sprint car competitors. More importantly, he stayed out of trouble on a night when it seemed like there was carnage every other lap.

Saturday saw the cars line up based on points accumulated on Friday. Sexton’s good performance saw him start on the inside of row three in one of the 12-lap B mains. All he had to do was finish in the top six to earn his ticket into the 30-lap Turkey Night Grand Prix main event. Early on, the teen was shuffled back as far as seventh but an aggressive move on lap two saw him move all the way back up to fourth. After a restart on lap three, he got sideways in turn four and got punted by another car. A quick recovery meant that he only lost one position back to fifth. He stayed in fifth until there were two laps to go and it looked like he was going to transfer into the main event. However, just in front of him in turn three, two cars tangled leaving the young driver with nowhere to go. Try as he might, he could not miss the mess, and he became involved in it. Unfortunately, the pretty #22 car suffered enough damage to prevent it from restarting. So, what looked like a sure transfer to the A main ended up with a frustrating 13th-place finish. It also brought an end to SGR’s 2022 season.

The Turkey Night Grand Prix closed the books on a highly successful season for Sexton Gatlin Racing. Patriarch Brent Sexton won the POWRi Southwest Lightning Sprint Car Series championship. In addition, in 29 races, the team racked up an astounding 19 main event victories. That kind of success does not come easy, and SGR is ready to begin the hard work for another successful year in 2023. If you or your company is interested in becoming a partner with this front-running team, please call (619) 454-6945 or E-mail mailto:sextonfire@cox.net or mailto:sextonfire@gmail.com.