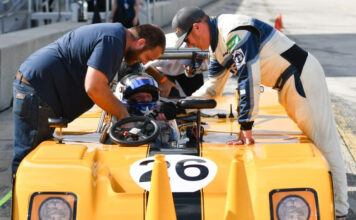 SEBRING, Florida (December 4, 2022) – A close and competitive seventh running of the Historic Sportscar Racing (HSR) Classic Sebring 12 Hour came to a grand conclusion Sunday afternoon at Sebring International Raceway where an even split of two repeat and two first-time race winners reached the top step of the podium after two days of vintage and historic racing competition on the legendary 3.74-mile road course.

Following a symbolic 12 hours of competition from Noon to Midnight EST on Saturday, Sunday featured the fourth and final rounds of competition for all four Run Groups to decide the winners of the 12 Hours of Sebring tribute race.

For the first time in the history of the “HSR Classics” races at Daytona and Sebring, the four Run Group leaders at the halfway point of the Classic 12 Saturday night all held on for their respective race wins. The victories were far from easy, however, as only one competitor swept all four of their Run Group rounds and each had to overcome the myriad of endurance-race issues that only the demanding Sebring International Raceway road course delivers.

Marco Fumagalli went a perfect two-for-two in HSR Classic Sebring 12 Hour victories with a strong race from start to finish for the Run Group A victory this weekend in the 1969 No. 26 Lola T160 prepared by Waite-N-See Motorsports (pictured below). The win followed Fumagalli’s 2019 Group A victory in his debut and only previous appearance in the HSR Classic 12 Hour.

This year, Fumagalli brought his friend and 2018 Classic 12 Hour Group A winner Toni Seiler along for the victory. Seiler took the green flag in Saturday afternoon’s opening round but only completed four laps before a terminal mechanical issue put his Waite-N-See 1969 No. 20 Lola T165 on the sidelines. Fumagalli graciously let Seiler share the race-leading No. 26 with him in Sunday’s fourth and final round to allow the friends and teammates to each celebrate repeat HSR Classic 12 Hour victories.

Run Group B saw a record-extending sixth HSR Classics victory by the Phil Reilly and Co. 1974 No. 26 Chevron B26 (pictured at top) piloted by car owner/driver Gray Gregory and his teammates Randy Buck and Ethan Shippert. The always-quick Chevron was driven to the win in three of this weekend’s four Group B rounds to seal the fourth HSR Classic Sebring 12 Hour victory in five years for the No. 26 team and drivers. Gregory and his teammates also have two career victories in the HSR Classic Daytona presented by IMSA, including a win in last month’s Classic 24 to go along with their first victory at Daytona International Speedway in 2020. The two Daytona wins combined with this year’s Sebring victory and three-straight Classic 12 Hour triumphs from 2018 through 2020 make the No. 26 Chevron team the career leader in HSR Classics victories for a single team and driver lineup.

The 2022 Daytona and Sebring sweep also made up for a rare shutout for the Chevron team last year in HSR Classics competition. Another Chevron beat the No. 26 to the line at Daytona and the team suffered a late loss at the Classic 12 when something broke on the Chevron at speed heading into Sebring’s turn seven chicane section. Shippert was uninjured in the incident but the determination to literally rebuild and rebound from 2021’s challenging HSR Classics paid off with this year’s double victory.

A first-time winner was the Ideal Motorsports 2014 No. 41 Oreca FLM09 Le Mans Prototype Challenge “PC” car of owner/driver Matthew Miller and his teammate James French. Miller and French won Friday’s one hour B.R.M. Endurance Challenge race at Sebring and that victory paved the way for the duo’s biggest win yet in historic and vintage competition in Run Group C.

Miller and French battled with the 2018 No. 17 Oreca 07 LMP2 of Stuart Wiltshire and former 24 Hours of Le Mans and HSR Classics race winner Richard Bradley throughout the race. More than once French reeled the newer “P2” car back in as he and Miller won all three Group C rounds on Saturday. Sunday’s fourth and final round went to Wiltshire and Bradley but the No. 41 took the checkered flag 27 seconds ahead of the No. 17 in the cumulative standings to seal the overall Group C victory.

The most dominating victory of the Classic 12 weekend was secured by first-time HSR Classics winner Brent Asplundh who was determined to put a narrow loss in Run Group D in last year’s race behind him. Asplundh finished first in three of four Group D rounds in 2021 but was just edged for the overall victory in the final standings.

This year, Asplundh left no room for error and was the only driver competing in the Classic 12 who swept all four of his Run Group rounds. Asplundh took the checkered flag Sunday in his Kelly-Moss Road and Race (KMR) 2015 No. 85 Porsche 991 Cup car a full lap ahead of the second-place finisher, who just happened to be his son Griffith Asplundh in his KMR 2016 No. 087 Porsche Cayman GT4 Clubsport.

The top finishing GT competitors in Run Groups A, B and C included Alain Ruede in his 2002/1965 No. 79 Shelby CSX (Group A), Kenneth Greenberg in his 1996 No. 836 Porsche 993 RSR prepared by Air Power Racing (Group B) and Thomas Herb and Ryan Dalziel in Herb’s Fall-Line Motorsports 2017 No. 16 Mercedes-AMG GT3 (Group C). Herb and Dalziel secured top GT honors in Run Group C for the second-straight year in addition to also scoring the overall group victory in 2021.

Each overall Run Group winner was presented with a special-edition B.R.M. Chronographes watch commissioned specifically for the HSR Classic Sebring 12 Hour. Other presentations included the now traditional Best-Plane and Best-Car awards that were presented Sunday just before this year’s lineup of amazing vintage and historic aircraft taxied back to Sebring International Raceway for departure after being on display for two days at the HSR Classic Sebring 12 Hour, Pistons and Props, presented by the Alan Jay Automotive Network. Attending pilots and their families select the best team or race car of the event while participating HSR competitors and officials vote on their favorite plane.

This year’s Best-Plane Award went to Tony Greene and Amy Greene for their fan-favorite 1973 Bulldog 120, a British-built plane manufactured by Scottish Aviation LTD. The aviation contingent in turn selected the “squadron” of colorful 1980s-era Porsche 944 race cars driven by Ray Shaffer, Ramsey Potts and Colin Dougherty and prepared by DAS Sport. Shaffer and Potts accepted the award on behalf of their teammates.

In addition to Seiler’s original Lola exiting early, other HSR Classic 12 Hour past winners and contenders encountered issues. Last year’s Run Group B winner Jim Farley finished second in his RM Motorsports 1978 No. 98 Lola T298 in two of Saturday’s rounds but an electrical issue in the other race knocked the Lola’s taillights out of commission and Farley out of contention for the repeat.

The Team Mean/KMW Motorsports 1978 No. 94 Chevron B23/36 of Ryan Harrold and Kevin Wheeler won Saturday’s second Run Group B round only to pull off early in the third round and retire to the paddock with an undisclosed issue.