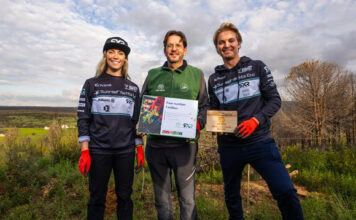 5 December 2022, London: Extreme E and Rosberg X Racing (RXR) have joined up together to start the restoration of an area in Sardinia, Italy, which had been ravaged by wildfires in 2021.

This is a collaboration between the series and RXR following the NEOM Island X Prix double-header, co-organised by the Automobile Club d’Italia (ACI) and Regione Sardegna, earlier this year. The initiative, which includes Allianz, Life Terra and MEDSEA Foundation as part of the collaboration, is a further demonstration of Extreme E’s legacy programme in Sardinia, having raced there in each of its two seasons, as well as RXR’s Driven By Purpose campaign.

As part of the visit, the team’s Founder and CEO Nico Rosberg was in attendance alongside RXR driver, Mikaela Åhlin-Kottulinsky, and Professor Peter Wadhams from the series’ Scientific Committee.

The ambition of the programme is to restore over four hectares of soil and plant 4,000 trees on the island of Sardinia, which has been heavily affected by wildfires.

What’s more, the one millionth tree of the Life Terra project launched earlier this year to help restore the area, was planted by Rosberg. The 2016 Formula One World Champion also received the Life Terra Climate Award in the category of ‘Most Impactful Sustainability Entrepreneur’ for his continuous commitment to environmental causes.

Nico Rosberg, Founder and CEO of RXR, said: “Rosberg X Racing isn’t just about racing. We are in Sardinia to promote an important message, alongside Extreme E and our partners Allianz, Life Terra and the MEDSEA Foundation.

“Through our Driven By Purpose campaign we support social and environmental projects at each of the series’ race locations. With our help, Sardinia can come back to its natural beauty and I couldn’t be prouder of this vision.”

During 2021, devastating fires in Sardinia destroyed 20,000 hectares of land, displaced over 1,000 people and killed around 30 million bees. The calamity resulted in incalculable damage to thousands of livelihoods, as well as to nature, including damaging water quality in the ocean. Wildfires such as these across the world are responsible for 20 per cent of total global CO2 emissions and cost $5bn to fight.

More than 30 local school children were invited to the tree planting which took place in the Sennariolo region of Sardinia, where they and attending guests were given a welcome talk on the importance of restoring the impacted area by Professor Wadhams.

After accepting the Life Terra Climate Award, Rosberg and Åhlin-Kottulinsky headed to the site of the restoration project where prior to the tree-planting they received a talk about the significance of soil restoration due to the wildfires.

The project has been undertaken to bring back native species of both bushes and trees, adding additional biodiversity to accelerate the recovery of vegetation in the area, and ensuring an ecosystem more balanced and resilient to the negative effects of climate change

Mikaela Åhlin-Kottulinsky, RXR, added: “A key reason we exist as team RXR is to drive awareness, educate and help tackle climate change. For me, the most important race that I will ever participate in is the race to save our planet.

“Even though we can only have a small impact, we are hoping to inspire our fans and followers to do their part, too. Seeing the future generation join us today, gives me great hope.”

RXR Treeplanting Sardinia 2022-17
Download
Extreme E has continued to help restore the historic olive groves lost to the wildfires. Ahead of the NEOM Island X Prix in July, the series teamed up with Vodafone Business, Extreme E’s Technology Communications Partner, to launch a fire prevention campaign within the area of Montiferru.

RXR’s efforts in Sardinia is also crucial to the team’s Driven By Purpose campaign, an initiative that supports sustainability projects at each of the locations the team visits and a key driver in RXR’s wider aim of operating as a climate positive team, raising awareness of the fight against climate change, social injustice, and inequality.

Professor Peter Wadhams, Extreme E’s Scientific Committee, added: “We are here in Sardinia to look at the science which has been carried out relating to brushfires. The area near to where the racing has been held has been an area of very severe wildfires that have destroyed a lot of the forest including olive trees. We are trying to study what the impact of that is and what can be done to protect against future fires.”

Sven Kallen, Founder of Life Terra, said: “We’re very pleased to collaborate with this important nature restoration project in an area so affected by wildfire. It coincides with an important milestone for Life Terra and we are very grateful to Nico Rosberg to have planted our tree number 1 million. We’re currently planting in 13 EU countries and this project is a significant contribution to accelerate European climate action.”

Extreme E will return to Sardinia for Season 3, where the series will undertake further developments of its legacy initiatives in the region.