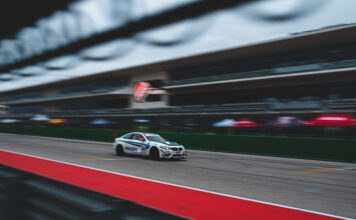 Austin, Texas (5 December 2022) – The World Racing League (WRL) powered by Hagerty hosted the National Championship at Circuit of the Americas (COTA) this weekend as the 90 car field battled door-to-door on the F1-grade circuit to close out the season. Round 3 Racing (R3R) emerged from the weekend with two championships and new hardware with four podiums throughout the double-header weekend.

Wet conditions during Friday’s qualifying session put the No. 401 Hagerty Motorsports BMW fifth on the grid for the first race of the weekend. Cole Loftsgard took the driver’s seat first for the opening segment, battling for fourth position for nearly four hours before passing the controls over to Brad McCall. Maintaining fifth position, McCall handed the wheel to Sarah Montgomery who raced her way to fifth at the finish.

After a mechanical issue forced them to the rear of the field, Montgomery started the final race of the season at the back of the GTO grid. She swiftly made up 24 positions before the mechanical issues returned, forcing her into the pits before her stint was complete. McCall took the wheel right before a full course caution came out, gaining a lap back to run in 15th place. Loftsgard took the penultimate stint, driving the car up to sit 10th. With an hour left, Montgomery closed out the race which saw her fight forward before a pit road penalty saw the BMW slotted 12th at the finish.

The Hagerty Motorsports team finished the season with five podium finishes and six consecutive pole positions. They finished fifth overall in the national points standings for their first full season of competition in the BMW M4 GT4.

“This weekend tested the 401 squad both as drivers and as a team,” said Loftsgard. “But I’m really proud and thankful of the effort that Marc (Gomora), Kevin (Tong), and the rest of the R3R put forth towards the massive setup improvements through the weekend. It’s been a very memorable year with Brad (McCall) and Sarah (Montgomery). I’m so lucky to have been a part of it, and I’m so happy to see the championships that our R3R teammates have earned.”

Starting Saturday’s race from third, Sabré Cook took the first stint onboard the Porsche Cayman and moved up to second before passing the car over to Loni Unser. She made her way up to lead the GP1 class. Brian Ghidinelli was the final driver to pilot the Team Cooper Tires Cayman. In the last 30 minutes of the race, the team made the critical call to pit for fuel as Ghidinelli returned to the fray in second. On the final lap, Ghidinelli passed for the lead to give Team Cooper Tires its fourth consecutive win of the season.

Sunday’s race saw Unser start from third as she maintained the podium position before handing the Cayman off to Cook under the first caution of the race. After going back green in fourth, Cook quickly made her way back to third.

Just about halfway through the race, Ghidinelli got in the Cayman in fourth and pushed his way up to second before handing the car back to Cook. With just a little over an hour remaining Cook charged forward, bringing home the second win of the weekend.

“This weekend we needed great driving, perfect pit stops and a little bit of luck,” said Ghidinelli. “Santa came early delivering two wins and a championship at COTA! The No. 701 ran flawlessly, which made the difference over 16 hours of racing. What a great way to end the season!”

Dennis Neel was first up in the Hagerty Drivers Club Porsche Boxster for Saturday’s race. Neel was able to run consistent laps keeping the car in third before passing the Boxster to Carter Pease. He pushed forward to run second before the end of his stint. Hannah Grisham finished off Saturday’s race crossing the finish line in third.

Starting Sunday’s race Pease took the green flag from the second row. A brief caution brought Pease into pit lane for a driver change as Grisham took her turn in the car. Grisham was able to drive the car up to the race lead which saw her create a significant gap to second before Neel got in the car. Due to penalties being reversed on competitors, the Hagerty Drivers Club team was forced to finish third.

Following up on their 2022 WRL Eastern Championship, the Hagerty Drivers Club team won their second consecutive WRL National Championship. The team finished the season with six wins out of a total of eleven races. In addition to their haul of race wins, they earned a combined total of four more second and third place finishes.

“We were a bit off pace to start off on Friday and ended up qualifying third for Saturday,” said Pease. “On Saturday we finished third, which really helped us with our championship efforts. I started in the car on Sunday and we had really good pace, but some full course cautions and penalties getting over turned it worked out that our competitors had a bit of an advantage. It’s a great feeling to win back-to-back national championships! Dennis (Neel) and I were in the Boxster together last year, and it was great to run with him again this year alongside Hannah (Grisham) and Buz (McCall). I’m really happy to have this opportunity!”

The 2023 World Racing League powered by Hagerty season will begin January 20th at NOLA Motorsports Park in New Orleans, La. Round 3 Racing plans to make announcements about the next season in the upcoming weeks.

Official Release
Previous article
Racing is a Constant Bid for Improvement with LTK and Damon Racing
Next article
Are Forward-Fold Campers Taking Over?