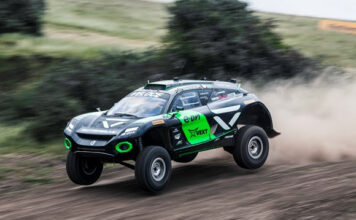 The Uruguay Natural Energy X Prix marked a new line-up for the team, with Kevin Hansen and Molly Taylor – who already boast numerous Extreme E silverware between them – aiming to make an impact.

That they did – becoming only the third team in the series’ history to finish as top qualifiers, topping the Saturday Qualifying standings by finishing second in Q1 and winning their Q2 Heat.

After their impressive Qualifying performance, Veloce Racing showed no signs of slowing down, with Hansen and Taylor performing brilliantly in Semi-Final 1. A highlight was Hansen achieving a critical and expert overtake on the ODYSSEY 21 of No.99 GMC HUMMER EV Chip Ganassi Racing, securing the win and advancing the team to the Final – their first of 2022.

Hansen took to the wheel first, with a good launch off the start line placing him in second. However, with five cars vying for top position into turn one, the Veloce car was forced wide, dropping to the back of the pack.

Both drivers continued to chase down the podium on the evolving track, but a late clash for Taylor with the title winning X44 Vida Carbon Racing car, ensured the team would have to settle for a credible fifth place finish.

Despite the Final not reflecting their pace potential, the weekend remains a significant step forward for the team, setting the tone for what Veloce Racing hopes to be a much improved 2023.

Molly Taylor, Veloce Racing, said: “It was an amazing weekend for us. We all have experience of Extreme E, but to work together for the first time and really click straight away is fantastic.

“We have produced some really strong results and we know that we have a lot of potential. We did everything we could, and we would have loved to have stood on the podium, but ultimately there have been so many positives and we’re all completely focussed now on the 2023 Extreme E season.”

Kevin Hansen, Veloce Racing, added: “It has been a fantastic first weekend and event together here at Veloce Racing. We have really created an amazing team spirit already, and we feel that we can only get stronger from here.

“I have felt really comfortable in the car and the performance has been there – we were for sure one of the fastest teams. P1 in Qualifying and in the Semi-Finals tells you that, but we were a little unlucky in the Final.

“I did my best in the dust, and Molly also did fantastically well, so overall we can be really happy because we have proven we can win races, which is where we want to be next season.”