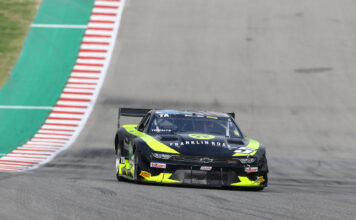 Franklin, TENNESSEE – December 6, 2022 – Ken Thwaits reflected on a fine season for Showtime Motorsports and Franklin Road Apparel in 2022 when we spoke to him at his Tennessee headquarters last week. The former XGT Champion went on to make an unexpected announcement that further boosts his team as they continue to establish the Franklin Road fleet among the preeminent outfits in the Trans Am Series.

“We have a new Mike Cope car coming for TA2 for 2023. We’ll have three very capable cars for next year and a seat is available.” The Mike Cope platform is very successful in the Trans Am Series presented by Pirelli TA2 Class. A seat with one of the rising stars among teams represents an outstanding opportunity for an ambitious driver and Ken said he would welcome approaches from qualified candidates.

Already signed up for 2023 is Dylan Archer who is behind the wheel of the FPEC sponsored car while negotiations remain ongoing for the available seats with Showtime and the team’s highly professional garage stable.

Former TA2 Champion Cameron Lawrence, who finished in P9 overall in the 2022 Drivers Championship has departed the Showtime Motorsports team – meaning there is also an opening in the No. 6 Chevrolet Camaro.

Over in the TA Class Ken made another bombshell announcement when he said that 2023 would probably be his last year driving competitively in the famous muscle car series. The former XGT Champion scored four podium finishes in 2022 but was narrowly denied a place in the top three Driver Championship despite outrunning his opponents on several occasions.

Reflecting on the year he said, “You know as far as 2022 goes I’m happy about how we performed. We’re the only team running a TA2 side of the garage and a TA side and that’s a big bite to take. We accomplished a lot. We didn’t win a race or lead a lap in TA2 but we won a couple of races in TA which was fantastic. We’ve made great progress in TA2 and had lots of expertise join the team so that bodes well for the future. As for the TA side, I’m happy with my performance in the car. The tire package really worked for me, and it improved the performance of the car.”

Ken will race again in TA again the No. 7 car in 2023 while Justin Marks will be bidding to give the team its first TA Class Drivers Championship.

“We’re going to give Justin our full support. Justin will be in the No. 99 Chevrolet Camaro TA1. Keith Grant will be racing a limited number of races in the No. 5 car which we will be preparing. Plus, there’s a seat in another car available for the right person. We will have three if not four cars that could be on the grid.”

Of his experience last year Ken added, “The camaraderie of the paddock, especially the TA side, has been great. As far as reliability of components are concerned, we’re going to be communicating about parts. You don’t want to beat somebody because their cars keep failing. The teams work very well to support each other with continued developmental safety and performance.”

He went on, “I had run-ins with several people but you shake hands afterwards and it’s over. It’s not like NASCAR where you owe people! You still try to race everybody fairly.”

About Showtime Motorsports:
The Showtime Motorsports team is based in Franklin Tennessee and is the power behind the Franklin Road Apparel brand. Showtime is responsible for preparing the cars for the track and keeping Ken Thwaits’ outstanding classic Camaro collection in tip top condition. Showtime Motorsports have now entered cars in both the TA and TA2 classes in the legendary Trans Am muscle car series with growing success. Showtime have a dynamic, passionate, and hugely talented staff of professionals dedicated to success and excellence both on and off the track.