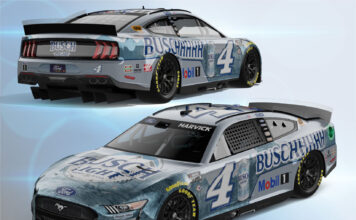 ● History was made last February when the NASCAR Cup Series competed for the first time at the Los Angeles Memorial Coliseum. The Busch Light Clash at The Coliseum was a bold way to unofficially kick off the start of the NASCAR season. On a temporary paved oval at a quarter-mile in length on top of what is typically the running track around the football field the Trojans of the University of Southern California call home, NASCAR thundered into America’s second-largest media market. The location was strategic, as was the event’s timing – held on the off-weekend between the NFL division championship games and the almighty Super Bowl. For all the unknowns beforehand, the event proved to be an absolute success. The buzz was palpable throughout the weekend as more than 70 percent of ticket buyers were first-time NASCAR attendees. Those not onsite were watching on TV, as 4.3 million people tuned in to the live broadcast on FOX. That rating was 168 percent higher than the year before when the Busch Light Clash was held at Daytona (Fla.) International Speedway and broadcast on FS1, and it was the Clash’s best rating since 2016 when it was on FOX. On Twitter, NASCAR was the No. 1 trending topic in the United States during the race, besting the NFL’s Pro Bowl, which was held the same day. Said Kevin Harvick, driver of the No. 4 Busch Light Ford Mustang for Stewart-Haas Racing, “I thought it was a great event. I don’t think you could’ve asked for it to go any better.” It’s why NASCAR is back at the Coliseum Feb. 4-5.

● While NASCAR certainly made history last year at the L.A. Coliseum, it’s appropriate to say auto racing history was remade. As World War II wound down, racing open-wheel midget cars around the Coliseum cranked up. Beginning in 1945, the United Racing Association (URA) ran on a quarter-mile track that was paved right over top of the athletic track. Racing continued through 1948, but under the auspices of the Automobile Association of America (AAA). But with more permanent racetracks populating Southern California, racing at the Coliseum fell by the wayside. That is until 1979 when Mickey Thompson packaged off-road racing into his innovative stadium series, with the Coliseum serving as his first event of many. Broadcast on ESPN and TNN, it was where an up-and-coming off-road racer with NASCAR ambitions first started making a name for himself. You might’ve heard of him – seven-time NASCAR Cup Series champion Jimmie Johnson.

● NASCAR celebrates its 75th anniversary in 2023 and for years the sanctioning body began its annual campaign at Daytona. Starting the year in California isn’t a break from tradition, necessarily. In fact, you could argue it’s a return to a previous tradition. Last year’s Busch Light Clash at The Coliseum marked the first time since 1981 that NASCAR didn’t start its season at Daytona. But starting the year off in California was not new. In 1965 and again from 1970 to 1981, the NASCAR Cup Series’ season-opening race took place at Riverside International Raceway, a road course approximately 50 miles east of Los Angeles. Riverside is long gone, the site now home to the Moreno Valley Mall, but the L.A. Coliseum was at 311 Figueroa Street 34 years before Riverside opened its doors in 1957 and it’s still there today. It’s a juxtaposition of old and new, a microcosm of NASCAR’s brave new world.

● In true L.A. fashion, almost any NASCAR Cup Series team can show up at the Coliseum, but not everyone is getting past the velvet ropes to participate in the 150-lap main event. Because the track at the L.A. Coliseum is only a quarter-mile in length – the shortest track the NASCAR Cup Series will compete on in 2023 – only 27 cars can compete in the feature. Getting to the main event is much more arduous than walking the red carpet and slipping the bouncer a $100 bill. Here’s how it works…

● On Saturday, Feb. 4, NASCAR Cup Series competitors will take to the track for practice prior to single-car qualifying to determine the starting order for four heat races. On Sunday, Feb. 5, on-track action will begin with four, 25-lap heat races consisting of 10 cars each. Below is a breakdown on how the heat races will be filled out:

● Go fast and turn left puts all of the above in more succinct terms, something Harvick has proven particularly adept at in his 22 previous years of NASCAR Cup Series competition. The driver of the No. 4 Busch Light Ford Mustang has 60 career Cup Series wins and is tied with Kyle Busch for ninth on the all-time win list. Not included in that total are Harvick’s wins in non-points races. He has two victories in the NASCAR All-Star Race (2007 and 2018), two wins in the Duel at Daytona qualifying race (2013 and 2019) and three wins in the Budweiser Shootout/Busch Clash (2009, 2010 and 2013), the precursor to the Busch Light Clash at The Coliseum.

● The quarter-mile oval at the L.A. Coliseum is the shortest of short tracks. That suits Harvick just fine. Harvick has totaled 121 wins across the NASCAR Cup Series (60), NASCAR Xfinity Series (47) and NASCAR Truck Series (14). Twenty-nine of those victories have come on short tracks, with eight Cup victories, 17 Xfinity wins and four Truck triumphs.

Kevin Harvick, Driver of the No. 4 Busch Light Ford Mustang

You grew up in Bakersfield, California, and were around for the Mickey Thompson Off-Road Series that raced at the L.A. Coliseum, as well as the 1984 Summer Olympics, which held many events at the Coliseum. What has shaped your perception of the Coliseum, and does racing there as a California native hold any special meaning?

“I’m not 100 percent aware of the full history of the L.A. Coliseum, but I have enough of the history of the L.A. Coliseum in my past, living in California, that I understand the magnitude of putting our vehicles on the ground there and having a race, and the historic events that have happened in the L.A. Coliseum. I remember those Mickey Thompson Off-Road races with the trucks and the buggies jumping out of the arches at the top of the stadium, down the hill, and usually at the bottom of the hill, once they landed, they went into a 90-degree turn. So, from a racing standpoint, I have memories of that. So it’s just a unique event and, when you look at the facility itself, there are just a lot of prestigious moments that go along with it.”

Prior to last year’s Clash, what’s the shortest track you had ever raced on and what was that experience like?

“The shortest track I had ever raced on was the Orange Show Speedway. It was in the football stadium and it was a paved, quarter-mile racetrack in San Bernardino, California. That was definitely the shortest racetrack that I had ever raced on. That was in my Southwest Tour, my Late Model days, that we raced there. That was always one of the smallest but, definitely, the narrowest because it was, literally, the running track, but paved.”

When it came to the actual racing at the Coliseum, how did reality line up with your expectations?

“I had anticipated it being a complete joke, to be honest. But after practicing and running the race, it was probably the most fun that I had all year because the cars raced so well. You could beat and bang, and the racetrack was actually pretty racy. As you look back on it, it was definitely a fun experience.”

As far as the scope of the event, how did reality line up with expectations?

“It all worked out better than everybody anticipated. When you look at the event itself, especially in Los Angeles, it’s just tough to have anything that’s really impactful. But that event for us was really impactful, and it was in a market where we tend to struggle a bit to get big audiences and grab the attention of the media during that particular time. For us, there wasn’t anything at the Coliseum that wasn’t a success last year.”

The Busch Light Clash tees up our version of the Super Bowl – the Daytona 500. How big of a deal is that for the sport?

“It really allows us to get a jumpstart on the season, and it leads into some storylines and other things while there’s a little bit of a break in the football season, because we all know that football is king, right? Football has got the most eyeballs on it and the most things going on, and putting that right in FOX’s backyard there in California and being able to put on an event like that – and we also had the Super Bowl there last year – to make the impact we did with all that was going on in L.A. was a big deal. So, for me, there’s not anything more you can do to kick off the season and make it any bigger than how we’re doing it at the Coliseum.”

For such a tight racetrack, the racing seemed relatively calm last year. To what would you attribute that?

“Well, I don’t think anybody knew what they were doing (laughs). I think as we got into the race, the unique part about the racetrack is the apron was usable, and you had to hit the curbing just right to be able to use that apron right, and how to transition your car to help it turn. The key to the racetrack was being able to use the extra part of the racetrack, and if you didn’t use it correctly, it still penalized you, but if you used it correctly, it gave more space than what you had above the curb.”

Is experience at the Coliseum a good thing, or will people now push the issue to where it might not be as clean a race as it was last year?

“If it’s like that last, last-chance race, that’s probably not what everybody’s looking for, but I think everybody’s going to be much more confident in how their cars race. Everybody knows it’s going to be a good event, and I think as you look at the racing, as long as the racetrack gets built the same, I think it’ll produce another good show.”