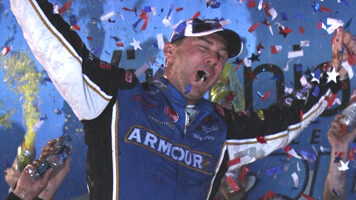 The Nationwide Series night life kicked into high gear at Richmond International Speedway with Kevin Harvick leading the field to the green friday night.  The series point leader going into the race, Brad Keselowski, started third with the hunger to extend the already large lead over Carl Edwards.

The new Nationwide Series car at RIR made for a good show as the driver’s battled changes in track conditions and each other for the right to hold the trophy high in Victory lane.

While some drivers cursed the new machinery others applauded the good racing it provided under the Friday night lights.

As the night got colder the action got hotter seeing Harvick, Keselowski, Kyle Busch, and Virginia native Elliott Sadler have their moments in the top spot. But by race end it was the determination of the pole sitting team that kept the wolves at bay. The win for Harvick put yet another feather in his Nationwide cap tying him with Mark Martin for the most wins in the series at RIR among active drivers.

The point leader, Keselowski, pulled of a dramatic second place finish keeping his buffer for the points chase intact.

Trevor Bayne tied his best career finish with a third place run. “I was thinking about trying to hit the perfect corner and make the perfect lap and hoping for Harvick to make a mistake.” Keselowski told the media post race when asked about the closing laps.  “It was closer than we wanted it to be, that’s for sure. But I bet it was fun to watch” Harvick said when asked about the dramatic finish.

“At that point all gloves were off,” Harvick said about hitting the wall coming to the finish. “I just gunned the throttle and was happy to hold on to it.” With one race of the weekend in the books Harvick looks on to the Cup Series event and the possible sweep of race weekend at Richmond International Raceway.