NOTES FROM THE NASCAR NATION: Robby Gordon gets energized and then search for his truck 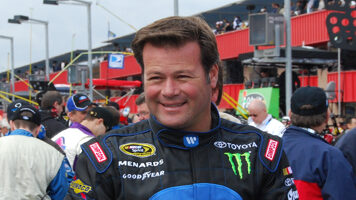 What a very interesting Talladega weekend for NASCAR Sprint Cup owner/driver Robby Gordon. First he hosted a press conference announcing his participation in a newly created energy drink company and then found himself searching for his personal, new company, truck that was apparently towed out of a speedway private parking lot.

During last Friday’s press conference Gordon announced that he and Steven Nichols, his longtime friend and attorney, have formed a partnership to manufacture, distribute and retail a new drink called SPEED Energy. The drink is being manufactured in a plant located in the Charlotte-North Carolina area with plans to distribute to super markets, convenience stores, bars and nightclubs in the very near future. Gordon said that the new drink will be marketed in three different flavors: Unleaded, Fuel and Octane adding they will provide the human machine with the fuel it needs to keep up with the “SPEED” of life.

On the racing side SPEED Energy sponsored Gordon’s #7 Toyota entry in Sunday’s race at Talladega an event that was ironically was sponsored by Amp Energy Juice. The new company will also sponsor Gordon’s car later this month when the Cup season ends at the Homestead-Miami Speedway.

Gordon hopes that initial interest in his new energy drink will generate enough revenue to sponsor his racing operation in 2011. Regarding plans for next year he said he’s committed to running the first five Cup races plus some other “fun” events in the big market areas. He also plans to race in next year’s Indy 500 as well as some off road events such as the Dakar Rally.

The following day Gordon learned that his personal truck, marked with SPEED Energy logos, had been towed from a speedway parking lot reserved for vehicles belonging to team owners and drivers. The order to remove his vehicle from the lot was alleged to have come from “track officials.” The allegations further claim that the removal was in connection to his official announcement regarding his new energy drink company.

A frustrated Gordon said “It’s gone.  I guess it’s in some impound area somewhere, but it’s my personal truck. I can appreciate that Amp Energy Drink is sponsoring the race but they don’t sponsor me.” Gordon also observed that other personal vehicles and golf carts, located in the same private lot, had some corporate logos that were in fact competitors with the race sponsors.

Gordon also said that he spoke with some fellow drivers who have endorsement contracts with Coke, and their Coca Cola Family of Drivers campaign, and they were wondering about the soft drink logos on their personal vehicles and golf carts adding “they said can we not have Coke on our golf carts or not have Coke on our cars? This one’s a confusing situation to me.”

By now the conspiracy theorists were running amuck. They quickly pointed out that the Talladega Speedway is owned and operated by The International Speedway Corporation, ISC, which is owned by the France family who in turn owns NASCAR. Somehow these bug eyed theorists jumped to the conclusion that the Gordon’s new energy drink announcement, at the Talladega Speedway was a huge conflict of interest with the sponsor of the NASCAR Cup race so his truck was removed from the parking lot to protect the interests of the NASCAR sponsor.

Amazing isn’t it? But, as radio icon Paul Harvey likes to say, here’s the “rest of the story.” The part that Gordon didn’t exactly mention when he informed the media that his truck had been towed last Saturday.

It seems there was a planned SPEED Energy publicity stunt that occurred on Friday night. Reports claim that Gordon’s company golf carts “assaulted” the festivities being held that night at the Amp Energy stage. This was actually confirmed via a “Twitter” message, alleged to have been sent by a SPEED Energy representative, that said “SPEED Energy just crashed the Amp Energy Stage.”

On Saturday speedway officials were reported to be very angry with Gordon and company for their publicity prank the night before and that’s when the order was given to have his personal truck, and the company golf carts, removed from the private parking lot. That action inspired yet another “Twitter” message that said ” ‘Dega Security towed the SPEED Energy truck off of the property, thanks 4 the free PR guys.”

In the aftermath there are some questions that remain. Was Gordon right to use the Talladega race, sponsored by Amp Energy, to announce his new drink company? Actually he was. A NASCAR Sprint Cup weekend attracts the presence and attention of a large contingency of the media. Special press conferences and announcements regarding new team sponsors are often common place during these weekends and it presents the opportunity to reach a wide audience.

Was Gordon’s, and SPEED Energy’s, Friday night surprise appearance at the Amp Energy stage out of line? It was so far out of line these guys couldn’t even see the line anymore. Amp Energy made a reported investment of $5.3 million plus so the fans could enjoy the Talladega race. That investment entitles them to market their products during the race weekend without having to deal with the surprise interference of a brand new marketing rival.

Were speedway officials right in their decision to tow Gordon’s truck and golf carts from the parking lot? That’s hard to say. But you certainly can’t blame them for being angry enough to want to invoke that punishment.

At this point in time do we really need a new energy drink? Probably not! That ever growing market is getting hopelessly crowded to the point where there’s going to be some causalities. Only those products with extremely strong corporate ties, such as Amp Energy Drink, are going to survive the high level of competition.

Just recently there was a television commercial for a new drink that helps people calm down. Does Robby Gordon, and his SPEED Energy colleagues, need to try this new product prior to the NASCAR weekend at Texas? It certainly can’t hurt.

SM Staff
Previous articleNOTES FROM THE NASCAR NATION: We could see a Texas sized impact on the chase
Next articleThe Original ‘Sliced Bread’, Remembering Rob Moroso