Dale Earnhardt Jr.: Reality Is, Races Are Run on the Track, Not at the Shop 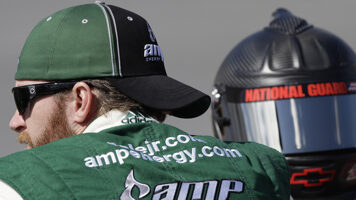 For the second straight season, Hendrick Motorsports team owner Rick Hendrick, was able to keep the fans as well as the media right where he likes them, poking around his organizations race shops looking for the hottest story to finish off the year.

We already know one the hottest stories to come out from behind the doors of one of NASCAR’s most decorated organizations is Jimmie Johnson’s record setting fifth straight championship in-a-row.

It’s not hard to see that most of the fans are still trying to convince themselves that somehow NASCAR got it all wrong by allowing such a travesty to enter the sport by way of a fiasco called the Chase for the Sprint Cup Championship. [/media-credit]Even though Johnson walked away the big winner for the fifth straight year, the biggest question to come out of the HMS camp during the season was the poor showing by NASCAR’s most popular driver again.

No other driver received the amount of publicity for such a poor season then the son of one of the true legends of the sport, Dale Earnhardt Jr.

Question after question was posted, along with many fictional answers as to why this 36 year-old driver from Kannapolis, North Carolina has not been able to perform according to their standards.

These standards are what every NASCAR fan hopes their favorite driver can achieve, but unfortunately, not all drivers are capable of reaching them, whether it be because of talent, skill, heart, desire, equipment or whatever excuse will be placed upon them.

Excuses have become second nature whenever Earnhardt’s fans have tried to justify or explain why he is having trouble with an organization that is said to have the best equipment in the sport.

How many organizations can boast of having a four-time, along with a five-time champion, on the same team?

Wasn’t it just last season when a 50 year-old driver by the name of Mark Martin, who was driving in his first season with the organization won five races, along with finishing second in the points behind cup champion Jimmie Johnson?

Martin just about stole the headlines away from Johnson towards the end of the season, but the big story was the signing of IZOD IndyCar Series star Danica Patrick, only a few days after NASCAR’s season ending awards banquet.

The signing of Patrick took the focus off of Johnson’s fourth championship, when a legion of doubters began flooding the NASCAR social sites explaining why the GoDaddy.com poster girl should not be allowed to race in NASCAR’s second tier series.

Marketing has always been the cornerstone of this great sport of ours, and it’s no wonder that Mr. Hendrick has made it one of his key ingredients when it comes to building a successful organization.

After all, when you look back to Earnhardt’s last three seasons with the organization, the majority of the fans began putting him into the same category as Patrick with the moniker that Hendrick only hired him because of his popularity.

Now, whether it is true or not has yet to be proven, especially after Hendrick heard the cry from the fans and replaced Earnhardt’s long time crew chief Tony Eury Jr. with Lance McGrew.

It wouldn’t take long before Earnhardt’s fans would begin questioning whether McGrew was the right man for the job, and once again, the focus of Earnhardt’s poor results would be back in the hands of his crew chief.

So when Hendrick made the announcement at the end of the season that Earnhardt would be getting Gordon’s crew chief Steve Letarte to start the 2011 campaign, along switching the shops of the 24 and 88 teams, almost immediately Earnhardt’s legion of fans went into a frenzy saying this should be the move that puts their driver back in victory lane.

Now from a marketing standpoint, it made all the sense in the world, especially when you are dealing with the sport’s most popular driver and part of the focus being on keeping his fans happy.

Changing shops is not the answer to the problems which Earnhardt has faced since coming on board with HMS in 2008, and when you think about it the only difference is the car number sitting next to his.

Earnhardt will be working with a new group of team members, which will be led by his new crew chief Steve Letarte.

Sharing a race shop with five-time champion Jimmie Johnson will not make him a better driver, nor will it help the team since each driver has their own driving style and set-ups which they prefer.

When looking back to 2002, when Johnson first came into the series, Gordon’s best season was in 2007 when he finished second in the point standings, with six wins while sharing the same shop with Johnson.

Gordon, who has proven to be a more experienced driver than Earnhardt, missed only one chase appearance in 2005, which happened to be the same year Steve Letarte took over for Robbie Loomis with 10 races left in the season.

Gordon would add an additional 10 wins, 78 top-five and 114 top-10 finishes in 190 starts with LeTarte as his crew chief, but in the end would only pick-up one win in the last three seasons which is way below Gordon’s standards.

“Five years is a long opportunity, and I had an opportunity to get him there, and we came close a few years but we never got there completely,” said Letarte who will not be back with Gordon next season.

Letarte also added that, “I’m definitely disappointed in that. … I’m a crew chief in this sport because of Jeff Gordon, and Rick Hendrick.”

Letarte knows he will have his hands full next season and the task at hand will not be an easy one, especially when you’re talking about a driver who means so much to the sport.

“I was excited for the opportunity. I was humbled. It’s a very important task for this company, for Dale Jr., for the sport, and I take it as that. I was very proud that I was the guy tagged for that. I’m excited, and I’m ready to go,” said Letarte when talking about the move to the No. 88 team.

Whether or not the changes will be beneficial to Earnhardt is a question mark that will be answered once the 2011 season begins, even though in the minds of the purist races are run on the track and not in the shop.

As far as Earnhardt’s fans are concerned, they need to realize a four-time champion encountered his own problems while sharing a shop with Johnson, and it’s not the shop that makes the driver, even though Earnhardt feels otherwise:

Earnhardt also added, “The only person that can truly help me get where I need to go starts with me, then it goes to Rick, Steve [Letarte] and those guys in your inner circle every week and in your corner every week.”

How many crew chiefs will it take to get Earnhardt back into victory lane is anyone’s guess, but the answer may be plain and simple in the eyes of NASCAR’s most popular driver:

“My biggest problem, I think, is my confidence,”