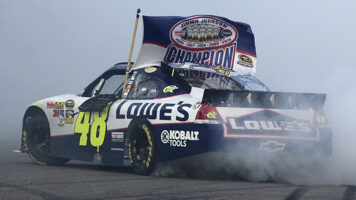 After winning his fifth straight Sprint Cup Series championship or even back to when he won his fourth, Jimmie Johnson likes to make it known that each championship season is different.

“It is a different year, a different Chase,” said Johnson during the contender’s press conference before Homestead. “I kind of think every year is different for that matter. I know the last four years we’ve had the same result. But every year, every championship battle has had its own little quirks to it.” [/media-credit]While the road to the title may go through the same 10 tracks in the Chase and the same 36 tracks that circle the country, how the championship is won is different. Johnson has come from behind and he’s dominated to win it.

Whether it was battling Carl Edwards, Mark Martin or Denny Hamlin or even the style of racecars – from twisted sister to half a season with the COT, to a full season of the COT then changes from the wing to the spoiler – nothing stays the same.

The last three seasons however, Johnson has seen one constant which threw an obstacle in his way: Texas Motor Speedway.

Like most tracks the Sprint Cup Series visits, his statistics at the 1.5-mile track in Forth Worth, TX are worth noting. He’s led laps, finished well and has even won before.

Since the win, which came in November of 2007, Johnson hasn’t performed to standard at Texas. That’s in the Chase events, the spring races have been nothing short of Johnson perfection. In nine spring races, Johnson’s results: sixth, eighth, ninth, third, 11th, 38th, second, second, and second.

But, back to the Chase, a time when the 48 is at their best, Texas has been their Achilles heel. A year after their win, Johnson went to Texas and ran embarrassingly. Carl Edwards, whom he was battling for the championship with, and, who won the race, lapped him early.

Johnson and team struggled from the beginning with the handling of the car and never got their lap back. In a rare occurrence, Johnson didn’t even lead a lap in the race and wound up finishing 15th.

“It’s like getting kicked in the balls over and over. That sucked,” Johnson said afterwards. In the end it wasn’t enough to keep Johnson from winning his third straight championship.

November of 2009, what many thought was unimaginable, happened: Johnson wrecked. Not only did he wreck, he wrecked in a Chase race.

On lap three Johnson jumped to the outside of Sam Hornish Jr., who was hit by David Reutimann. Hornish was sent sideways into Johnson, causing the 48 to start spinning and come back down the track where hit Hornish and then the inside wall.

To the garage Johnson went where crew members from every Hendrick Motorsports team came to the aid to repair his mangled Chevrolet. The work was enough to send Johnson back to the track where he was able to finish (38th) but with valuable points. Again though, he didn’t lead a lap.

Afterwards Johnson said, “I don’t think I could have done anything different. 77 lost it. I wish he could have waited a few more laps before he lost control of his car.”

Three months after the incident, when the NSCS hit media day in Daytona, the now four-time champion still wasn’t happy. Johnson ripped into Hornish saying, “The guy I wouldn’t want to learn from would be Sam Hornish. He hits way to much stuff, including me.”

Johnson was also miffed that Hornish hadn’t called to apologize or say anything about the wreck. When asked, Hornish said Reutimann had called him to take the blame but Hornish wasn’t going to reach out to someone that was mad at him.

When Johnson continued his assault, Hornish said it surprised him and that, “Jimmie’s had ample opportunity to look at the tape.”

For the second year in a row, Texas had shaken up the Chase. Should the speedway need a new slogan, they should jump on the fact that they know how to produce championship drama and have made it three years in a row where the championship was almost lost there.

The 2010 AAA 500 was more than Denny Hamlin winning and Johnson having to swap pit crews. The 48 team again showed up to the Lone Star state off of their game, betraying Johnson’s confidence heading into the weekend.

“Texas and Phoenix have been really good tracks and we’ve always raced well at those racetracks,” he said.

In the first three practice sessions Johnson never ended a session higher than ninth and he qualified 17th. On Sunday evening of raceday he ran between eighth and 15th, again fighting the handling of the car and fighting pit road.

Pit road selections saw Hamlin’s team, winners of the pit crew challenge, pitting the 11 car in front of the 48. Stop after stop Johnson was beaten off pit road and suffered slow stops by his team.

His finish wasn’t as bad at 2008 and 2009, he finished ninth and led one lap on a green flag pit stop, but it was enough to lose the point lead. Leaving Texas with two races to go, Johnson sat 33 markers behind Hamlin.

Oh the Chase drama at night is big and bright, deep in the heart of Texas!

The latest drama has been thought to be the biggest. Championship was over, Hamlin had Johnson down and almost out. It was an unfamiliar and unwanted territory for Johnson.

“It sucks,” he said. “I don’t want to be there. Every year feels different being here this late in the game. We all know how special a run we’ve been on and how rare it is in sports period … I know I’m down and I need to get back on top.”

Back on top he was two weeks later for a fifth title.

For three years Texas came close to crowning a new champion and while it didn’t, Texas did set up dramatic Chase conclusions. Texas has also shown that Johnson and company are human even if the past five years have had many watching them do inhuman things.

With three straight second place finishes in the spring Texas race, what has made the Chase race slow him down? As Johnson has faltered at Texas, drivers he was battling for in the Chase won two of those three races.

The best news for the competition is that Texas will again be in the Chase in 2011 as 42 drivers again try to dethrone Johnson. All of which is helping  Texas quickly become the Chase race you don’t want to miss.

SM Staff
Previous articleDale Earnhardt Jr.: Reality Is, Races Are Run on the Track, Not at the Shop
Next articleQuestions, Answers and Conundrums from the SpeedwayMedia Mailbag