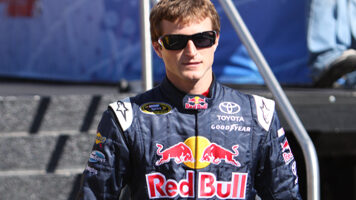 There is no doubt that Kasey Kahne is ready to put this past season behind him, from the turmoil at Richard Petty Motorsports to his abrupt departure and early arrival to his new team, Red Bull Racing. Kahne will herald his New Year with plenty of newness, including a new number on his race car, a new teammate with Brian Vickers’ return, and some new knees to boot. [/media-credit]Kahne’s most recent news is about the new number on his Red Bull race car in the 2011 season. Kahne and Red Bull Racing have been granted approval by NASCAR to use the No. 4, Kahne’s favorite number, which he often uses on his sprint car.

Red Bull Racing requested the number for Kahne from Morgan-McClure Motorsports, who is currently not using the number on their race cars.

“We worked with NASCAR and, out of respect of Morgan-McClure, we also talked to them so they are aware,” Jay Frye, Red Bull Racing General Manager, said. “It’s for one year only, and NASCAR could give the number back to Morgan-McClure in 2012.”

Kahne will use the number for his interim year with Red Bull prior to his move to Hendrick Motorsports in 2012. Red Bull will then revert back to using their familiar No. 82, formerly driven by Scott Speed, who was recently released from the team.

In addition to his new number, Kahne is also looking forward to his new teammate Brian Vickers. Vickers has rejoined his Red Bull team after recovering from his battle with blood clots.

“I’ve talked to Brian recently and he is back, so that’s good,” Kahne said. “I’ve always respected Brian on the track. He does a nice job and I think we can work well together. As far as teammates, I think we can do things together and help the company.”

Kasey Kahne will also ring in the New Year with a set of new knees. The 30 year old one-upped Denny Hamlin by having surgery on both knees at one time. Kahne, who had surgery right before Thanksgiving, is already walking, albeit slowly, without his crutches.

“I’m just taking it easy,” Kahne said. “I’m just trying to get ready for next season and be prepared when we start at Daytona.”

There is no doubt that Kasey Kahne is absolutely ready to put the tumultuous 2010 season in his rear view mirror.

“It was just really up and down,” Kahne said about his past year. “The higher ups at RPM caused a lot of confusion and there was a lot of bad luck and things happening throughout the year. It ended up being a pretty unsuccessful season.”

“But I was glad I got to go with Red Bull the last five races and just try to look at doing something new and something fresh,” Kahne continued. “I got to get a little bit of a head start for 2011 and I think we accomplished that.”

Kahne admitted that his transition this season has been a bit challenging, having to adjust to “a whole different car, engine, and how everything runs.” But he acknowledged that the worst was behind him and is especially looking forward to having Kenny Francis, his long-time crew chief, back atop his pit box.

“Now that Kenny Francis has come over and about five or six other guys that I’ve worked with in the past, I think it’s going to be really good,” Kahne said. “I think we are going to be able to run strong each and every weekend.”

“I’m really looking forward to this season,” Kahne said, predicting all good things for his New Year. “Red Bull has some really nice race cars, good parts and pieces, and good people. We’ll just put it all together and it should be pretty awesome.”