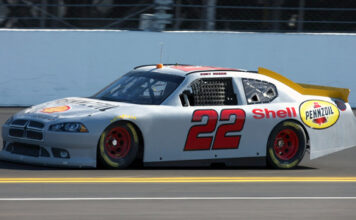 [/media-credit]“I am honored to represent Coca-Cola during 2011 racing season,” said Busch, who scored two wins and two poles in 2010, finishing 11th in the final Cup Series standings. “We’re looking forward to a great season as we transition to the No. 22 car and it’s awesome to have Coca-Cola on board for the ride.”
Busch finished 11th in last year’s Sprint Cup Series driver standings. He posted two wins last season.

The Las Vegas, Nevada native switched rides within the Penske Racing organization and will race the No. 22 Shell-Pennzoil Dodge Charger.

According to the press release, the sponsorship will be for at least eight races. Hornish is expected to race in at least ten events this season in the Nationwide Series. Specific events to be announced at a later date.

“It’s exciting to be able to return to the car and get a chance to represent the Alliance Truck Parts brand again this season. I know everyone at Penske Racing will be working hard to get the best results possible this year in the Nationwide Series.”

After sponsoring Brad Keselowski’s run to a Nationwide Series driver championship last season, Ruby Tuesday has expanded it’s sponsorship to the Cup Series for this season.

In addition to sponsoring Keselowski in nine Nationwide Series races, Ruby Tuesday will also have their logo on the rear deck lid of Keselowski’s No. 2 Dodge in the Sprint Cup Series.

“I am very excited to represent Ruby Tuesday again in 2011,” said Keselowski. “They were an integral part of our championship season in 2010, and I look forward to winning more races with them in the future. The fact that they have grown their relationship to include the ‘Blue Deuce’ is something in which we take great pride at Penske Racing.”

Keselowski posted two top-ten finishes last season, earning an average finish of 22.4. The 2011 season will be his second full-time season after making his debut in 2008.