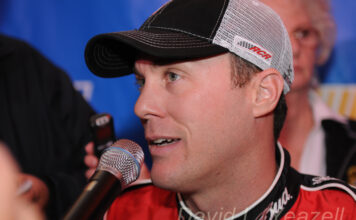 [/media-credit]Daytona has always had this magical aura with stories surrounding the Daytona 500 that everybody loves to tell over and over. As we near closer to the Daytona 500, here is a look back through some of the highlighted moments in Daytona 500 history.

Six years later, the Daytona 500 fell on February 18th. Coming into the event, emotions were high considering what had happened six years earlier and everybody’s thoughts. For Richard Childress Racing, there was one way that they could make the pain easier – win the race.

With 20 to go, Harvick made his charge as he went from 29th to second. The final lap marked a battle between Kevin Harvick and Mark Martin. As they raced off of turn four, a wreck happened behind them and had NASCAR called a caution, the winner would’ve been Martin. Though NASCAR let them race to the finish line and instead, Harvick won the race, 0.2 seconds over Martin.

“I knew when I got out of the car I wasn’t going to be the good guy (after passing Mark Martin),” Harvick said. ” But that’s just the way it works. Somebody has to win and somebody has to lose. And fortunately today was our day to win. I got so excited at the end of the race, and I knew we had won. I just didn’t realize how excited I was, and I punched the dang mirror out of the car. Just overexcited, I guess. Knocked the mirror right out.”

“I didn’t ask for a win in the Daytona 500, I asked for a chance and I let it slip through my fingers…No one wants to see a grown man cry and I’m not going to cry,” Martin said afterwards.

With the win, Harvick dealt the medicine that was needed for Richard Childress Racing. It was also fitting with Harvick winning as after Earnhardt’s death, it was Harvick that Childress chose to fill the team’s third car, changing the No. 3 to the No. 29. It marked an impressive moment for Harvick as one of his biggest wins, though let him come out of the shadow to become his own man.

Emotions were seen across the board as everybody was crying, excited and angry with the finish. Even Harvick’s wife Delana was overcome to her emotions as she cried.

With the dramatics of the race and how it played out with Harvick winning, its no question that this Daytona 500 is yet another example of Daytona’s Magical Aura.