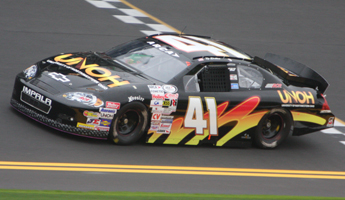 Richard Childress’ grandson Ty Dillon (No. 41 University of Northwestern Ohio/Richard Childress Racing Development Chevrolet) won the pole with a lap of 48.509 seconds (185.533mph) to win the Menards Pole Award presented by Ansell. This is the fastest lap that has been run at Daytona since Kirk Shelmerdine in 2001 with a pole speed of 187.352mph.

“It was really special to me. I’ve been coming here for a long time since I was a little kid to see my grandfather, watching races, watching qualifying, and this being my first time at a superspeedway and to have this car get the pole is really special to me,” Dillon said. “I’m glad we could do it with UNOH.

“Our team has definitely worked hard enough so that we have one of the best cars in the garage. I believe we can definitely win this race tomorrow. I just have to be patient; we have the car to do it.”

This marks the start of a solid weekend for Dillon, who is trying to go for his third consecutive win in a row after winning the final two races last year – Kansas & Rockingham. Dillon has also been running a dirt modified at Volusia Speedway Park each night to get more experience.

“I think it just helps me with my experience, getting as much seat time as possible,” he said. “It’s been hard every night getting back to the hotel at 1 in the morning and getting up at 6 to come here to be with the guys, but I love racing. I wouldn’t want to be doing anything else.”

Starting second will be Venturini Motorsports rookie Kyle Fowler, who drove a lap of 48.65 seconds (184.995mph) in his No. 15 Chevrolet.

“Venturini definitely has an awesome piece there with the 15 car, and I’m just the lucky guy that gets to hold the steering wheel,” Fowler said.

Fowler has made just five prior starts in the ARCA Racing Series, but none on a track larger than a mile-and-a-half.

“It was absolutely incredible to make those first few laps around here,” he said. “Heck, I got goosebumps just walking on the premises. It’s every driver’s dream to race here. It’s racing’s biggest stage, and I just want to be there at the end.”

Following the rookies will be Venturini Motorsports veteran Steve Arpin (No. 25 Mike’s Hard Lemonade Chevrolet), with a lap of 48.762 seconds (184.57 mph).

“We were really focused (in practice) yesterday on qualifying stuff,” said Arpin, who led the series with three victories last year. “It’s really hard at Daytona, because you’ve got to try to qualify the best you can because track position’s really important, but at the same time you’ve got to make the car drive as good as it can.

“We tried to find that happy medium and balance the car the best we could. The best thing I’m excited about is that our car drives awesome in the draft and that’s all that’s important – to get that trophy at the end of the day tomorrow.”

Matt Merrell, who is making his first start since 2009, will start fourth, in his No. 32 Red Line Oil Toyota. Six-time Daytona ARCA winner Bobby Gerhart completed the top five in fifth with his No. 5 Lucas Oil Slick Mist Chevrolet.

Other notables include IndyCar star Milka Duno who will start 23rd in his first ARCA start while nine-time ARCA Racing Series champion Frank Kimmel will start 26th in his 20th ARCA Daytona start.

The ARCA Racing Series will host a final, 45-minute practice at 10 a.m. on Saturday. Live timing and scoring will be presented by ARCA Nation at ARCARacing.com.

To see more articles by Ashley McCubbin and live updates from the weekend, check out http://newsfromthepits.blogspot.com/