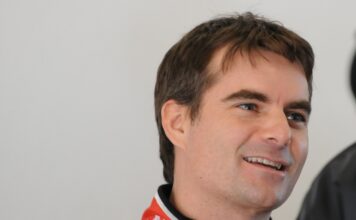 *In response to NASCAR’s requirement that drivers can only compete for the title in a single series, Jimmie Johnson quickly proclaims his intentions for the Sprint Cup championship. In a related development, Sam Hornish, Jr. declares that although he will be racing, he won’t be competing for titles in any series. [/media-credit]*Jeff Gordon slips past Clint Bowyer on the final turn to win at Phoenix on February 27th, snapping his 65-race losing streak. Riding a wave of momentum not felt in nearly three years, a jubilant Gordon vows to “finish what he started,” and does exactly that, finishing 34th the following week at Las Vegas, ending his one-race winning streak.

*NASCAR’s new points system, which logically awards 43 points to the race winner down to one point for 43rd place, is a big hit, particularly among math-challenged racing fans. However, midway through the season, NASCAR’s dimwitted CEO Brian France inexplicably orders a return to the old format, deeming the month of July “Throwback Month” in NASCAR. Then, just as suddenly, he demands a change back to the 43-point system. Subsequently, Brad Daugherty creates a firestorm when, on Showtime’s “Inside NASCAR” program, he says that the points system “has seen more ‘tweaking’ than the Mayfield family.”

*Tony Stewart is involved in his second altercation with an Australian in less than three months when he slugs a kangaroo at a roadside petting zoo in rural Tennessee. Stewart is charged with assault and is ordered to undergo counseling under the conditions of a plea deal. As an extra measure of good will towards Australians, Stewart finances a new racing team, called Gibb Racing, and presents it to the Bee Gees. In addition, at Stewart’s Prelude To A Dream charity race at Eldora Speedway, Stewart has participants draw qualifying numbers from the pouch of his new pet wallaby, “Mojo-ey.”

*After a solid 13th-place finish in the Daytona 500, Kevin Conway’s Nemco Motorsports No. 97 ExtenZe Toyota fails a post-race inspection due to a rear spoiler that measures 3/16 of an inch too high. The No. 97 team proclaims innocence, and cunningly claims that the increase in length must be due to ExtenZe sponsorship. This leads to a huge marketing push for the brand in ads featuring the catchy slogan, “ExtenZe: For Those Times When You (Or She) Can’t Take It No Longer.”

*After Jimmie Johnson opens up a sizable lead four races into the season after a controversial win at Bristol on April 3rd, a radical group of conspiracy theorists coin Johnson’s quest for six straight Sprint Cup titles as “The Fix For Six.” However, an injunction filed by twice-dead Motley Crue bassist Nikki Sixx, who had previously copyrighted “The Fix For Sixx” as the title of the sequel to his 2007 autobiography The Heroin Diaries, puts an end to the use of the title.

The conspiracy theories live on, to such a degree that Jesse Ventura is seen lurking around the Lowe’s hauler at Daytona in July.

*Kurt Busch, in the No. 22 car sporting the Shell/Pennzoil paint scheme made famous by Kevin Harvick, revels in his newfound ability to “get under Harvick’s skin.” Busch and Harvick tangle at Bristol on March 20th as Busch sends Harvick’s No. 29 Budweiser car spinning. Harvick exacts revenge later, jumping Busch in the garage area, where he backhands the Penske driver, who falls and bumps his head on his car. Busch loses all memory of his time in the Miller Lite car, and Harvick boasts of his ability to slap the “tastes great” out of Busch’s mouth.

*Denny Hamlin sweeps the 2011 season’s two Martinsville races, outdueling Jimmie Johnson on both occasions. After winning the Tums Fast Relief 500 in October, Hamlin takes the Chase lead by a 21-point margin. Crew chief Mike Ford unwisely questions the ability of the No. 48 team, and all but guarantees Hamlin will end Johnson’s five-year reign.

Later, at the NASCAR awards banquet in December at the Wynn Las Vegas, Johnson is feted as champion, while Ford amazes those in attendance, including magician Criss Angel and illusionists Penn and Teller, by eating crow with a foot in his mouth.

*After a sparse crowd of 45,000 attends March 27th’s Auto Club 400 in Fontana, heated arguments ensue, not only among those debating whether or not California should remain on the Sprint Cup schedule, but also between pessimists and optimists, who can’t decide if the stands were half-empty or half-full.

*Pop diva Christina Aguilera returns to Texas after botching the national anthem at February’s Super Bowl in Dallas, this time to perform the song before the Samsung Mobil 500 on April 9th in Fort Worth. Bolstered by a throng of over 90,000 appreciative fans, all holding placards that, when raised, spell out the words to the “Star Spangled Banner,” Aguilera nails the lyrics. Aguilera then jams with Texas icons ZZ Top on “Got Me Under Pressure” during an after-race concert, where she fails to see the irony of the song.

Kasey Kahne wins the race, giving Red Bull Racing its first and only win of the year.

*After Carl Edwards and Brad Keselowski crash at Kansas on June 5th in the Kansas Speedway 400, tensions flare in the garage area as Edwards stalks his nemesis, while Keselowski angrily does the same. The two finally meet near the NASCAR hauler, where the two rivals feverishly engage, surprisingly in a passionate embrace, as both later cite the need to “keep their friends close, and their enemies closer.”

Keselowski’s father, Bob, is moved to tears, of disgust, and disowns his son.

*Matt Kenseth takes a stroll through the Talladega infield on April 16th, the day before the Aaron’s 499, and goes unnoticed. He then takes the same walk wearing his drivers suit, yet still goes unrecognized. He finally experiences a moderate level of acknowledgement when he dons a Dale Earnhart, Jr. baseball cap, and is mobbed by adoring fans, of Earnhardt’s.

In Sunday’s race, Kenseth survives three big crashes that take out a total of 21 cars, including the rest of the Roush Fenway stable, and holds on for the win after two attempts at a green-white-checkered finish.

A wild celebration in Victory Lane ensues, as the No. 7 GoDaddy.com team pops the tops on a case of champagne, dousing Patrick, who then invites viewers to log on to GoDaddy.com, where, for a nominal fee of $9.95, they can view the unrated remainder of the celebration, as well as receive a four-pack of ShamWows and a t-shirt that reads “Sucker” across the front.

*Jimmie Johnson heads into the 2011 season finale at Homestead with a 19-point lead over Kevin Harvick, and secures his sixth consecutive Sprint Cup championship with a fourth-place finish. Johnson, only one title shy of the 7 achieved by Richard Petty and Dale Earnhardt, sports a t-shirt that reads “I Am Legend.” Meanwhile, Hendrick teammate Jeff Gordon, finding his legacy of 4 Cups diminishing with every Johnson triumph, dons a similar t-shirt, with a design that asks “Am I Legend?”

*A rejuvenated Kyle Busch, buoyed by a new, calmer demeanor resulting from a Far Eastern-flavored regimen of hypnosis and acupuncture, adopts the nickname “Rowdy Doody,” and enjoys the support of a new, appreciative fan base, dubbed the “M&M Peanut Gallery.”

Busch wins 7 races and heads into the Chase with the top seed, but falters at New Hampshire after winning the previous week at Chicago. Busch prematurely declares his Cup hopes dashed, then whines incessantly about his bad luck, leading to an ESPN.com headline of “Over And (P)out.”

*After a broken drive shaft on lap 153 knocks Mark Martin out of the race at Dover on May 15th, Martin takes to Twitter via his mobile phone to report the situation. Martin draws comparisons to Brett Favre after texting a photo of the damaged equipment, a picture he unfortunately tags with the caption, “Take a good look at my shaft.”

Martin misses the Chase and finishes 18th in the standings, then announces his retirement in an echo chamber.

*Clint Bowyer wins the One Last Race To Make The Chase 400 at Richmond on September 10, and thanks his teammates, and Dr. Seuss, for making the win possible. Bowyer earns the sixth seed in the Chase For The Cup. The Chase field is set as follows (in order): Kyle Busch, Denny Hamlin, Kevin Harvick, Jimmie Johnson, Carl Edwards, Bowyer, Matt Kenseth, Greg Biffle, Jeff Gordon, Kurt Busch, Joey Logano, and Juan Montoya.

*Chicago Bears head coach Lovie Smith gets the 2011 Chase For The Cup underway, waving the green flag at Chicagoland Speedway on September 18th under threatening skies. With Kyle Busch leading after 200 laps, the skies open up, and thunderstorms drench the track. Fittingly, Bears quarterback Jay Cutler mans the red flag, signaling the field that the race is over at the halfway point.