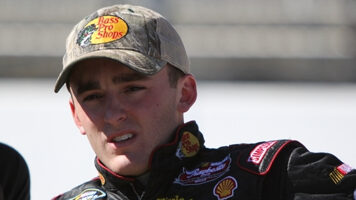 After starting on the pole in the final two races of the 2010 season, Austin Dillon gets his third pole in a row as he won the pole for the NextraEra Energy Resources 250.

“Last year I had to worry about how the truck handled,” Dillon said. “I feel way more comfortable than last year. Last year I felt like I was weaving in the draft. Now I’m way more confident. We’ve still got to go out there and run all the laps, but I feel like we can win the race.”

Dillon won his seventh career pole for the season opener with a lap of 179.047mph, as he was the only driver to get into the 179 mark.

The truck race is set to be run Friday night – February 18th, 10 years after the death of Dale Earnhardt. A lot of people have discussed the possible emotions involved if Dillon is able to take the No. 3 truck to victory lane.

“I’m sure it’ll be emotional for a lot of guys that were on that team,” Dillon said. “There’ll be a lot of significance running on that day. My part of it will just be winning for the fun of it, to make my grandfather proud for all the heartaches.”

If Dillon is able to pull off the win, he also knows what it would mean to everybody involved.

“Seeing how close everybody is, just knowing how that had to be [when Earnhardt died] and the feelings I remember from seeing my family when it happened, I’m sure it’ll be emotional,” Dillon said. “Seeing my grandfather’s reaction would mean the most to me.

“I don’t think I’ll get emotional, but if he gets tore up, I would probably do the same.”

“Tires are not going to be a problem on the new surface,” Hornaday said. “It’s just going to be getting behind somebody and hanging on.”

However, following qualifying, Piquet was moved to the back of the field as the roof measurement was found too low. Almirola, who had qualified 26th, was too low in the rear so he will join Piquet at the back.

With Piquet moving to the back, it moves Carmichael up to the fourth position with Johanna Long now in fifth.

“I’m really excited about it,” said Long. “We had a really good car and I knew we’d qualifying really decent. It’s just the drafting part (during actual race) for me.
“I gained a lot of experience today in practice and I am really excited to see what the race holds.”

Friday’s race, which will be televised by SPEED, is scheduled for 7 p.m.