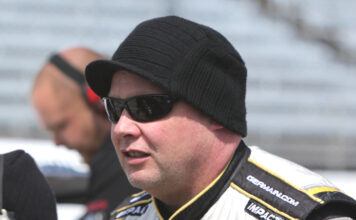 [/media-credit]Last year was the dream season for Todd Bodine as he won the championship, despite all the talk of lack of sponsorship.

This year so far, it hasn’t been all roses as the year started off with a crash at Daytona, resulting in a 23rd place finish. Though following a third place finish at Darlington, Bodine now sits seventh in points and looks to keep climbing as he heads to one of his favourite tracks – Martinsville Speedway.

Bodine took some time to answer some questions about the season, his career and more earlier this week.

Ashley McCubbin: What are some of your thoughts on the season?

Todd Bodine: Well, our performance has been really good; we’ve run well every race, just had some bad luck to start the year, but with the performance being good, we just got to keep doing what we’ve been doing.

AM: What are some of your thoughts going into Martinsville?

TB: Well, I really like Martinsville. I grew up going there watching my brothers race, always run well there, and never been able to get it all done and get one of those clocks so hopefully we can get there and have a good truck and do our thing right to get one of those trucks.

AM: Last year with winning the championship, there was a lot of talk about the lack of sponsorship. How is the Sponsorship Situation as of this point for this year?

TB: Not a whole better. We’ve got Tire Kingdom and Valvoline for a few races and Georgia Boot came on for one race, but other than that, we’re still searching for sponsors. It’s pretty bad when the champion of the series can’t get a sponsor when he runs up front every week, but we’re working. We got a lot of things cooking, a lot of things in the fire.

AM: What championship means the most?

TB: Well, they both mean a lot. To get the first one, it was a relief to finally get it done. It’s the first championship our family has ever had. And the second one was validation for the first one. We didn’t luck in to the first one and we came back and we’re able to do it again as a team to prove we were worthy of it the first time.

AM: What are some of your thoughts on the competition level in the series?

TB: The competition level is better than it’s ever been from when the series was born till now. It’s obviously the most competition we’ve ever had. We’ve got more really good quality race teams with good quality drivers and it makes for good racing every week.

AM: Speaking of the quality of drivers, what are some of your thoughts on the Cup drivers coming in and running the series?

TB: Well, whenever you can race against that type of competition, it just makes you a better driver. That’s the way I’ve always looked at it, even when I was one of the young kids racing Mark Martin and Dale Sr and Harry Gant and all of those guys. The better the driver, competitor you race against, the better driver it makes you so I feel the same way today.

AM: How’d you get associated with Germain Racing?

TB: Mike Hilman Sr. He’s been a friend of mine for 25 years and he went over there to run the program and get it going and he brought me in there as a driver.

AM: With Germain Racing expanding this year, what are some of your thoughts on your teammates?

TB: Well, we’ve got a great group of guys and the guys working on the trucks to put them together, but I’m fortunate to have three great teammates and they’re all difference. Brendan (Gaughan)’s been around a little while and has run well in the trucks before. Justin (Lofton), it’s only his second year in the Truck Series and he’s a really good kid, lots of talent, and we’re hoping we can bring him along to become a company driver. And Max Papis, a lot of experience in different forms of racing and first year in Trucks so he’s learning and been a great guy. We’ve got an incredible group of people at Germain Racing.

AM: What was it like growing up in a racing family?

TB: Well, that’s all I’ve ever done and that’s all I’ve ever known. Our father owned a race track for 25 years. If I knew another way of life or another lifestyle, I could give you a good answer, but I don’t know any other lifestyle, this is all I have ever done. To me, this is normal and you know, I grew up watching my brothers run races and run upfront so that’s where you’re supposed to be and what you’re supposed to do.

AM: Talking about your brothers, were there any sibling rivalries with getting opportunities?

TB: No, not at all. We’re so far in difference in age that we never had that sibling rivalry ever. It never had a chance to materialize. The first time we had a chance to compete against each other was in the Cup Series. At that point, we had already got through that and after all of that, it was about beating each other on track.

AM: What track haven’t you won at that would mean the most for you to win at?

TB: Martinsville, definitely. I grew up racing at Martinsville and racing at Martinsville and changing tires on pit road and I’ve been going there since I was eight years old to watch my brothers race and I’ve seen them win a lot of races there. To me, that’s like a second home so to win there would be incredible. Another is Walkin’s Glen, my home track. I never got to win a race there. I ran really well and came close to winning, but never got it done. I would like to see the Truck Series to go back there and have another opportunity to win. That’s our home track and that’s the area we were brought up in so those two places are especially special to me.

TB: There’s so many good memories and a few bad ones, like when Richie Evans got killed. It’s so much apart of the history of our family; it’s hard to name one. I think Geoff’s got 16 wins there and Brett has four or five. That’s a lot of good times, a lot of great memories. It’s hard to pinpoint just one.

AM: What is your first racing memory that you can recall?

AM: What is some advice that you’d have for people trying to get into racing?

TB: Well, you got to live it and sleep it. It’s got to be everything you want and you got to be willing to sacrifice to get it. Racing is a tough business and it’s a long hard road, so there’s no easy way to get there. You got to work hard and not let the disappointments get you down.

AM: What are some of your hobbies away from the track?

TB: Well, I don’t have a lot of hobbies. Racing is pretty much it. I’m actually trying to build a hotrod, and that’s about it.

SM Staff
Previous articleRegan fastest on Friday; Qualifying on Saturday at Martinsville
Next articleRon Hornaday Calls His Shots For Martinsville, Says 33 Team ‘Ones to Beat’

Myatt Snider in his No.2 Richard Childress Racing Chevrolet brought his car to the Checkered Flag in first place, winning it the hard way, in double overtime, in his 39th start. For two consecutive weeks, the NASCAR Xfinity Series has had first-time winners.
Read more
ARCA