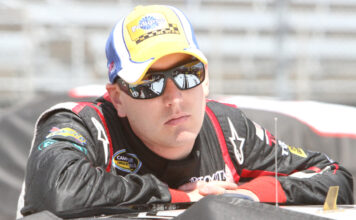 1. Kyle Busch: After leading 151 laps and finishing third at Fontana last week, Busch duplicated the feat at Martinsville, leading 151 of 500 laps and coming home third. It was the third time this year Busch has lost a lead late in a race, and although he assumed the points lead after his Martinsville finish, many are left wondering if Busch’s killer instinct disappeared along with his “bad boy” persona.

“Hey,” Busch said, “they said the same thing about the ‘new’ Kyle Busch as they have recently about a late Kyle Busch lead in a race: ‘It’ll never last.’

2. Kevin Harvick: Harvick was floundering in 27th before a red flag for Martin Truex, Jr.’s wreck allowed the No. 29 Budweiser team time to regroup. With a strategy established, Harvick methodically climbed to the front, and slipped by Dale Earnhardt, Jr. with four laps to go, then cruised to the win. It was Harvick’s second-straight win, and boosted him four places in the point standings to fifth, 15 out of first.

“That’s right, Junior Nation,” Harvick said. “Kevin Harvick sucks…. the wind out of a potential Junior Nation-wide celebration. But I realize passing Junior doesn’t make you the most popular driver. Being Junior makes you the most popular driver. But racing is not a popularity contest. You don’t win races by collecting the most votes. Junior fans should realize there’s no shame in losing to Kevin Harvick, just as there’s no glory in being named ‘Mr. Congeniality’ at season’s end.

“Early in the season, we were little more than mediocre. In fact, many of my competitors were calling me ‘Happy Medium.’ Now, the 29 car is the one to beat, and I, along with crew chief Gil Martin, have raised our expectations. Collectively, we’re known as ‘Happy Gil More.’”

3. Jimmie Johnson: After a caution on lap 465 brought the field into the pits, Johnson emerged as he entered, in second behind Kyle Busch, and a seventh Martinsville win was a distinct possibility for the No. 48 Lowe’s team. However, Johnson was nabbed for speeding entering pit road, and forced to restart at the end of the longest line. Restarting 15th, he picked off four positions, and finished a disappointing 11th.

“I’ve won here like clockwork,” Johnson said. “Now I can say I’ve lost here by clockwork. I was shafted. There’s no way I was speeding. Obviously, there’s a vast, rite-wing conspiracy at work against yet another season’s-end ceremony honoring the champ, and there’s bias at play. NASCAR doesn’t want to see another Jimmie Johnson championship. It’s called getting ‘five-timed,’ and as was the case when Brooke Gordon got ‘two-timed,’ it’s costing a Hendrick driver dearly.”

4. Carl Edwards: Edwards struggled at Martinsville, finishing one lap down in 18th and falling out of the top spot in the Sprint Cup point standings. He holds the second spot, five points behind Kyle Busch.

“By no means am I a short-track expert,” Edwards said. “I’m no ‘ringer,’ but some, Kevin Harvick included, have called me a ‘wringer.’ When people think of Carl Edwards, they don’t think ‘short track;’ they think ‘short fuse.’”

5. Dale Earnhardt, Jr.: Earnhardt led 17 laps in the Goody’s Fast Pain Relief 500, turning in his best performance of the year with a second at Martinsville. After a 24th to start the season at Daytona, Earnhardt hasn’t finished worse than 12th since, and has climbed the point standings to eighth.

“I’m disappointed I didn’t get the win,” Earnhardt said. “But I’ll say the same thing countless fans have said many times over at the No. 88 merchandise tents: ‘I’ll take it.’

“Now, should I fail to win at Texas, I’ll be the owner of a 100-race winless streak. Sure it looks bad, but I’m finally doing something my daddy never could.”

6. Ryan Newman: Newman saw a promising day at Martinsville deteriorate quickly when a broken header pipe on lap 328 left his No. 39 Haas Automation Chevy with compromised horsepower. A subsequent flat tire and spin sent him further back in the field, and Newman eventually hobbled home with a 20th-place finish, two laps adrift of the lead lap.

“A broken pipe, a flat tire, and a spin,” said Newman. “That’s bad for Ryan Newman, but even worse for Jeremy Mayfield.”

7. Kurt Busch: Busch survived an eventful day at Martinsville, overcoming right-front damage sustained when he clipped Bobby Labonte midway through the race to salvage a 16th-place finish. After four-straight top-10’s to open the season, Busch has finished 17th and 16th in the last two weeks, and after holding the points lead after Bristol, he’s now down to fourth, 14 behind younger brother Kyle.

“There’s good news and there’s bad news,” Busch said. “The bad news is I’m down to fourth in the point standings. The good news? Kyle’s in the lead, so I like my chances to improve. Brother Kyle holds a Sunday lead about as well as Greg Norman at the Masters.”

8. Matt Kenseth: Kenseth was penalized on the first lap of the race for changing lanes before the start/finish line, putting him in a hole early. But the No. 17 Crown Royal Black team patiently battled back, and Kenseth regained the lead lap on lap 221. He eventually finished sixth, joining Roush Fenway teammate David Ragan in the top 10. Kenseth is now ninth in the points, 24 out of first.

“I qualified 24th,” Kenseth said. “As such, you can never underestimate the importance of taking the 23rd position less than a lap into the race. NASCAR officials foiled my master plan. But that’s par for the course in the life of Matt Kenseth. Even my efforts to cheat are just as unspectacular as the rest of me.”

9. Jeff Gordon: Gordon posted his first top-5 result since winning at Phoenix in February with a fifth at Martinsville. He led 37 laps on the day, and vaulted four places in the Sprint Cup point standings to 12th, 49 behind Kyle Busch.

“Hendrick Motorsports placed four cars in the top 11,” Gordon said. “Things are looking up for HMS. Or are they? I haven’t won in four races, Mark Martin hasn’t won in 51, Dale Earnhardt, Jr. in winless in his last 99, and Jimmie Johnson’s hasn’t won a championship in well over 130 days!”

10. Juan Montoya: Montoya finished fourth in the Goody’s Fast Pain Relief 500, charging late with several key passes to forge his fourth top-10 result of the year. He moved up one spot in the point standings, and is now seventh, 18 out of first.

“I hear that my former Formula 1 teammate Kimi Raikkonen has signed to drive trucks in the Camping World series. It’s good to see F1 stars gravitating towards NASCAR. Years on the F1 circuit will prepare you for the rigors of any racing series, and Kimi’s vast open-cockpit experience qualifies him not only for a seat with Kyle Busch Motorsports, but as a Southwest Airlines pilot as well. Kimi will be the first native of Finland to race in NASCAR. I’d say that’s a good omen for him, as he’s already crossed the ‘Finnish’ line even before his first race.”