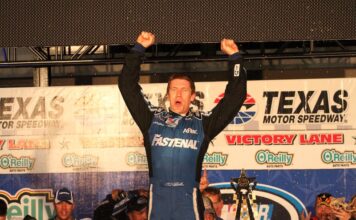 [/media-credit]Carl Edwards dominated the O’Reilly 3oo at the Texas Motor Speedway Friday night holding off a hard charging Brad Keselowski.  Keselowski was almost a half second back at the finish.

The only car that gave Edwards a challenge crashed into a car that blew its tire in a bizarre incident.  On lap 88, Busch was in Edwards tracks when they went to pass the slower car of the No.52 driven by Tim Schendel. As Edwards went by the car shot up the track and right into Busch’s No.18 car sending it into the wall.  From there it was all Edwards

Afterwards Busch said, “It felt like we were probably the only car that was going to give Carl a shot. It’s a shame that we didn’t have the chance to race it out the rest of the night.”

Ed Coombshttp://www.sportshooter.com/coombse
Ed began covering NASCAR for the former Gater Racing News regularly in 2000. He began working with Speedway Media in 2003 by supplying exclusive photos from the races covered. Currently he is the Editor and Assistant Publisher of Speedway Media. He also manages staff and credentialing. With the closing down of Gater News after nearly 50 years he hopes to become a more regular contributor at Speedway Media as a writer and photographer. My Twitter name is @coombsed feel free to follow me I am a member of the National Motorsports Press Association.
Previous articleRagan Leads Impressive Roush Fenway Qualifying Effort; Wins Pole in Texas
Next articleCarl Edwards Captures Second Consecutive NASCAR Nationwide Series Win at TMS.