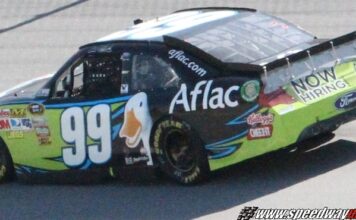 [/media-credit]1. Carl Edwards: Edwards paired up with Roush Fenway teammate Greg Biffle late at Talladega, and led with two laps to go before finishing sixth following a chaotic shuffling on the final lap. Edwards maintained the lead in the Sprint Cup point standings, and leads Jimmie Johnson by five.

“With five laps to go,” Edwards said, “there were eight drivers with a chance to win the race. Eight, if you count Dave Blaney. I found it interesting that I started the race beside Brad Keselowski and finished it beside the concrete wall. That’s called running a race between a hard head and a hard place.”

2. Jimmie Johnson: Benefitting from a race-winning push from Hendrick Motorsports teammate Dale Earnhardt, Jr., Johnson won the Aaron’s, nipping Clint Bowyer by .002 in a stirring finish at Talladega. Johnson’s first win of the year moved him up to second in the Sprint Cup point standings, where he trails Carl Edwards by only five.

“I’m just glad I was able to lead the Hendrick charge. There may only be room for one driver on my bumper, but there’s room for three on my coattails.”

3. Dale Earnhardt, Jr.: Earnhardt finished fourth in the Aaron’s 499, sacrificing a chance for the win to push teammate Jimmie Johnson to a dramatic victory. In the tandem racing prevalent at Talladega, Johnson was faster in front with Earnhardt pushing. After the race, a grateful Johnson presented Earnhardt with the checkered flag.

“I can’t thank Jimmie enough for the flag,” Earnhardt said. “Actually, I think once is enough. I’m honored, but not winning at the track at which I’m most capable of winning is something I’d like to put behind me. Thus, the flag becomes my ‘checkered past.’

“You’ve got to hand it to Jimmie, though. He’s a very shrewd racer. It was quite clever of him to say he was slower in the back. Of course he’s slower; he’s behind me. But I bought it, and now I have to live with it. I guess I’ll now be categorized as the ‘consummate’ teammate. ‘Consummate’ would be the operative word, because I believe I got screwed.”

4. Kevin Harvick: Harvick nearly pushed Richard Childress teammate Clint Bowyer to the win at Talladega, as Bowyer lost to Jimmie Johnson by .002 in a photo finish at the line. Harvick finished fourth, collecting his fourth top-5 result of the year, and leaped five places in the point standings to fourth.

“One day I’m stocking grocery stores with Budweiser,” Harvick said. “The next, I’m thriving in the role of dedicated teammate, and using the No. 29 Budweiser Chevy to push Clint Bowyer to a near-win at Talladega. In both cases, you could say I ‘shelved’ Budweiser for the sake of others.”

“In a restrictor plate race,” Busch said, “sometimes you have to learn to accept your ‘restrictor fate.’ C’est la re(strictor). Joe Gibbs Racing cars have had their engine issues this year, but at Talladega, it was Logano who was the culprit. Either way, you could say it was still Toyota’s fault.”

6. Clint Bowyer: Bowyer led the most laps at Talladega, 38, but came up just short at the end, losing to Jimmie Johnson’s No. 48 Hendrick Chevy by .002, which tied Ricky Craven’s 2003 win at Darlington for the narrowest margin of victory since the age of electronic timing. Bowyer improved two places in the point standings to tenth, 50 out of first.

“It was an exciting end to an otherwise boring race,” Bowyer said. “I think we gave the fans what they wanted. Although I didn’t win, I was the pleased the No. 33 BB&T Chevy could add a little ‘interest’ to the race.”

7. Matt Kenseth: Kenseth’s run of four-straight top-10 finishes ended at Talladega, when he was collected in a lap 139 wreck that sent him to the garage. Kenseth’s No. 17 Crown Royal Black Ford was nailed by Kyle Busch’s No. 18 Toyota after Busch was clipped by Joey Logano. Kenseth finished 36th, and fell four places in the point standings to eighth.

“Wrecks at Talladega are a lot like what Kyle Busch must experience with his teammates at Joe Gibbs Racing,” Kenseth said. “There’s no way to avoid them. And speaking of ‘unavoidable  wrecks,’ my brother Kurt had quite the day at Talladega. The ‘Duke Of Hazard’ invented a new style of racing called ‘constrictor plate,’ because afterwards, everyone wanted to choke him.

“Now, lost in all of the Talladega hoopla was the story that NASCAR chairman Brian France filed a lawsuit against his ex-wife, claiming she recorded phone conversations without his consent in order to extort money from him. That’s amazing! Amazing that she thought someone would actually want to hear what Brian France has to say.”

8. Kurt Busch: Busch led 19 laps in the Aaron’s 499, but faded at the finish after losing Dave Blaney’s No. 36 car in the draft. Busch finished 18th, and remained fifth in the Sprint Cup point standings, and now trails Carl Edwards by 28.

“Unfortunately, I was in the middle of three major wrecks. But don’t blame me—I couldn’t see what was ahead of me. Apparently, my fans are much better at one thing that I, and that’s ‘blindly following.’”

9. Ryan Newman: Newman finished 25th in the Aaron’s 499, a result that could have been much worse had Newman not made two miraculous saves to stay in the race. On lap 171, Newman momentarily lost the draft with Denny Hamlin, but when their bumpers reconnected, Newman spun, collecting Juan Montoya’s No. 42. Newman miraculously straightened his car and kept going. Two laps later, he spun again, and kept the car out of danger. After pitting for four tires and fender repairs, he resumed in 27th. He eventually finished 25th, and remained seventh in the point standings.

“I even amazed myself,” Newman said. “Only one other thing has made me grip a steering wheel so tightly. That would be Rusty Wallace.”

10. Jeff Gordon: Gordon started on the pole at Talladega, and after riding safely at the back of the pack for most of the race, charged at the end with a continual push from his drafting partner Mark Martin. In the thrilling dash to the line, Gordon finished third behind Hendrick teammate Jimmie Johnson and Clint Bowyer.