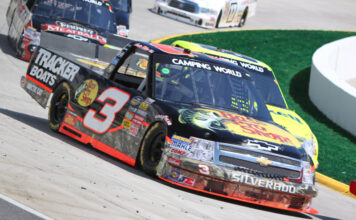 After Martinsville, Austin Dillon sits seventh in points, 20 points out of the lead with one top five and two top 10s. [/media-credit]The season started off on the wrong note for the 20-year old with a crash at Daytona, though since then he has been climbing up through the points.

“It’s a better start for me,” he said. “I think we’re in a better situation this year in points and I feel the competition level is high in the Truck Series.”

The competition level in the Camping World Truck Series, to some fans, is better than any of the top three divisions. Dillon attributes that to the talent and teams.

“I feel there’s a wide variety of new guys that have come in with a lot of talent and you still have the veterans that know how to run these tracks and how to get it done,” he said.

One of the new talents is Dillon’s teammate Joey Coulter, who has been competiting in the ARCA Series the past couple of years.

“Joey Coulter is a great driver,” he said. “He’s done a good job this year. I feel like he’s had some bad breaks so far, but he is going to be just fine. He’s started to learn how these trucks driver and there’s still a lot to learn for him and he will learn more as we go to the mile and a halfs, tracks he hasn’t been to. It’s a learning experience, but we’ll take care of him.”

Dillon, grandson of car owner Richard Childress, has been around racing his entire life.

“You get to go to races a lot and its just a regular family,” he said of the experience in a racing family. “You look out for each other,  take care of each other, and we go to the track and its just nice to have a strong family background in something that I love to do.”

The first races he remembers going to date back to his dad, Mike Dillon, racing late models.

“Probably going to all of my dad’s late model races, but first time big one was going to Dale Earnhardt’s when he won the Daytona 500,” he said. “We got to go to victory lane and do the hat dance when he won the race at Daytona. That’s the first one I really remember.”

The first time he got in the racecar was in a bandolero on a quarter mile behind Charlotte Motor Speedway.

“It was fun as it was such a challenge and I knew after that it was what I wanted to do,” he said.

As he goes forward with the rest of the year, Dillon will be a driver who will be challenging for wins at every track, though Texas and Michigan are two he’d really like to win at.

“I really like Texas and Michigan,” he said. “Both those tracks are really fun. I like Michigan – that’s just fun; it’s a really racey track. Texas because the pistols, the cowboy, and I feel like we’ve been really close in winning a race there so hopefully we’ll get one of them.”

For now, Dillon is focused on Nashville this weekend as he will compete in both the Camping World Truck Series race and the Nationwide Series race.

“Great race track,” he said. “I have ran well there in the past. Get to run a Nationwide car there for the first time. There’s a pretty cool guitar for a trophy so I wouldn’t mind taking the guitar home.”

It has been reported that Dillon will be running full-time in Nationwide next year, though he will make his first Sprint Cup start later this year.

“Its just another learning curve,” he said. “It’s awesome. I didn’t know I’d be in the Cup Series that fast. It’s going to be a lot of fun and I’m just going to have to take it day-by-day from the time that we get there.”

Away from the track, Dillon hosts his own radio show “Country Boy Radio” on High Point University’s radio from 4pm-6pm EST every Monday.

“I love it,” he said. “It’s something that I just started this year and within the first 30 minutes of the first show, I knew keep doing it and really enjoy it.”

SM Staff
Previous articleReady or Not Here They Come: Drivers Eager for Cup Rides Without Much Experience
Next articleNASCAR Top-10 Power Rankings: Talladega