What If Junior’s Last Name was Smith? 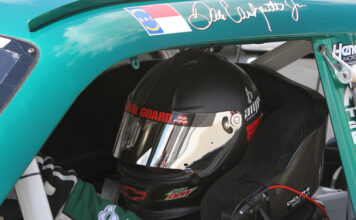 Twice this year, the fans of NASCAR’s most popular driver have had their hopes rise only to fall in the closing laps. No driver has the fan base of Dale Earnhardt, Jr. These fans are extremely loyal to their driver to extent that they reject all others. This is why it has become so frustrating for them. Dale Jr., as he is fondly known, hasn’t won a race for a while—a long while. Earnhardt hasn’t won a Sprint Cup point race since 2008. He’s only won two races in the last five years and yet, his fans still come out to races, wear their various green or red clothing and root like the devil for their hero. It’s almost an addiction or so it seems. [/media-credit]Many credit his popularity to the fact that he is his father’s son. Dale Earnhardt, Sr., was legendary. He won seven NASCAR Sprint Cup championships and his driving style and persona struck a chord with NASCAR fans everywhere. When he was killed while racing in the Daytona 500 on February 18, 2001, many of the senior Earnhardt’s fans became loyal to his son, and that hasn’t been fair to Junior. In fact, the father and the sons are very different. While the father wheeled a car hard and didn’t mind using his bumper to move people out of the way to win, the son has a much different style and a lot less success on the racetrack. The expectations that he is his father, or would have the same success, have put tremendous pressure on Earnhardt.

So, what if his name wasn’t Dale Earnhardt, Jr.? Let’s say his name was Dale Smith, Jr. Would fans have the same adoration for him? Would they be satisfied with his record? Would every race be so important? Would Dale drive more relaxed and be more confident? All good questions.

Let’s compare Dale Jr. with a driver who’s fan base is minute in comparison, is hardly noticed or mentioned by the media or the fans in the stands, and has similar statistics. Matt Kenseth and Dale Earnhardt, Jr. raced together in the minor leagues of NASCAR – the Nationwide Series. They pretty much entered the Sprint Cup Series at the same time. The tale of the tape is strikingly familiar. They’ve both been in 417 races. Kenseth has the most wins (20 vs. 18), the most top ten finishes (168 vs. 156), and more pole positions (16 vs. 10). Kenseth also has a Sprint Cup championship in 2003, and yet his name is not a household word, nor is he the darling of the media types who cast commercials. In fact, I’ve seen Kenseth in street clothes move through a race track unnoticed by all but a very few. Let Junior try that. There might be a riot. It’s obvious that the name means a lot. And the pressure that goes along with it comes nearly once a week has to be unbearable.

If his name was Smith instead of Earnhardt, it’s fair to assume that the son of a legend might be more relaxed and perform better, or is it? Earnhardt was leading in the closing laps at Martinsville, only to have a faster Kevin Harvick pass him for the win. Fans were chewing their fingernails and some appeared to be praying. The same was true at last week’s 600-mile race at Charlotte Motor Speedway when Earnhardt ran out of gas on the last lap, giving the win to, yes, Kevin Harvick.

I think it’s time for Junior fans to just let Junior be Junior. Pretend for a moment that he is Dale Smith, Jr., a pretty good racecar driver with 18 career wins. Take the pressure off and find another driver to root for just in case things go wrong for Junior. Don’t leave early when he’s not doing well and don’t blame everyone from the crew chief to the owner when things don’t go well. There is no doubt that the man can wheel a racecar, but putting pressure on him to replicate what his father did is a little much.

He’s having a fine season so far, and that should be good enough.

Ron Fleshmanhttp://www.ris-news.com
Ron Fleshman has followed NASCAR racing since attending his first race at Martinsville Speedway in 1964. He joined the Motor Sports Forum on the CompuServe network in the 1980s and became a reporter for Racing Information Systems in 1994. In 2002, he was named NASCAR Editor for RIS when it appeared on the World Wide Web as www.motorsportsforum.com. He can now be found at www.ris-news.com. Ron is a member of the American Auto Racing Writers and Broadcasters Association. You can find Ron following and reporting on the top three NASCAR divisions each week. As a lifer in his support of racing, he attends and reports on nearly 30 events a year and as a member of the motor sports media, his passion has been racing for 47 years. He lives with his family in rural West Virginia and works in the insurance industry when not on the road to another track.
Previous article
Family Time in Charlotte
Next article
STP and ‘The King’ Reunite