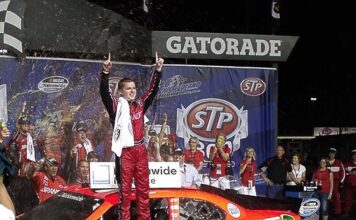 Justin Allgaier walked to victory lane at the Chicagoland Speedway after winning the STP 300 by having just enough fuel to pass the slowing car of leader Carl Edwards who had run out of fuel heading into the final turns. Allgaier’s car rested on the front stretch empty of fuel but Allgaier had the checkered flag in his hand for the walk to victory lane.

As Allgaier sped past Edwards his own car also sputtered and ran out of gas so he pulled down to the apron of the track with Edwards following. They both crossed the finish line before Trevor Bayne, making his first start since being hospitalized with a mystery illness in April, did under his own power at full speed. There was a lapped car in front of Bayne and initially Allgaier thought he was the winner. “I thought it was Trevor,” he said.

Allgaier said, “Jimmy Elledge has made great calls all year long. I’m having a blast. To get a win in Illinois is just great. It doesn’t get much better than this. It’s a pretty awesome day.”

Bayne said afterwards, “I could have won this thing. I should have stopped conserving fuel a little earlier. But we’ll take this third place. I feel good.”

Aric Almirola and Jason Leffler rounded out the top 5.

Carl Edwards dominated the race for the for 2/3 of the race but battled with the Kevin Harvick Inc cars driven by Elliott Sadler and owner Harvick. Sadler had a great run but elected to get fuel and tires as the laps were winding down. Reed Sorenson’s sixth place finished allowed him to take the lead in the series points from Sadler by 2 points.

Danica Patrick ran in the race and finished 10th, on the lead lap after getting a “lucky dog” lap back earlier in the race after going  a lap down to the leader.

Ed Coombshttp://www.sportshooter.com/coombse
Ed began covering NASCAR for the former Gater Racing News regularly in 2000. He began working with Speedway Media in 2003 by supplying exclusive photos from the races covered. Currently he is the Editor and Assistant Publisher of Speedway Media. He also manages staff and credentialing. With the closing down of Gater News after nearly 50 years he hopes to become a more regular contributor at Speedway Media as a writer and photographer. My Twitter name is @coombsed feel free to follow me I am a member of the National Motorsports Press Association.
Previous articleTOYOTA NASCAR Camping World Truck Series (NCWTS) Post-Race Notes & Quotes Kansas Speedway
Next articleDodge Motorsports Notes & Quotes – NNS Race Final – Chicagoland Speedway