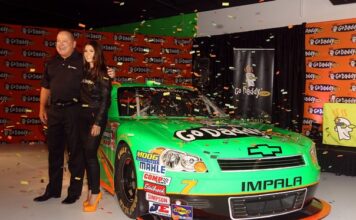 [/media-credit]When it was first announced that IZOD IndyCar Series driver Danica Patrick would be officially making her debut in the NASCAR Nationwide Series for the 2010 season, the internet exploded with the fans blogging about what type of impact she would have on the sport.

With many unanswered questions because of her lack of experience behind the wheel of the much heavier stock car, and the fact that her Indy car career was less than stellar at best.

The fans began to take sides after they realized she was serious about her attempt to try and compete in a series, which is nowhere near the types of cars she grew up racing in. Skepticism ran rampant as the season progressed, and Patrick herself made it hard for the fans to gauge if indeed she had what it took to compete at this level, since her results reflected her lack of experience.

Patrick ran a total of 13 races in 2010 without a top-five, or top-10 finish, and only finished one race on the lead lap. With each passing race, we heard the watered down versions of why she might become an overnight success, with most of them based on her one victory that came in the IZOD IndyCar Series. Even though her results were nowhere near what she felt she was capable of, she continued to pursue her dream of one day becoming a star in a series where most felt her popularity and GoDaddy’s marketing skills took over.

After all it is was founder and CEO of GoDaddy.com Bob Parson’s, who thrust Patrick into the limelight with his unique marketing strategy, while capitalizing on the sex sells society that we live in today. The only lingering question that had yet to be answered was, did popularity take over where talent used to be the main focus when a driver came into the series?

Parson’s himself said that, “This is not only big news for NASCAR fans; it has all the ingredients for some major GoDaddy-esque marketing magic.” “If she decided to move into ice skating, I’d go with her. The only issue I have is if I’m stroking the check, because she certainly is one of a kind. I expect to be able to (sponsor her), but business is business. You have to make hay while in the prime of your life, and she’s definitely (there),” said Parsons.

Kyle Petty, who lately has become one of Patrick’s biggest detractors once, said that, “She’s not Dario Franchitti and she’s not Tony Stewart. She’s not really shown over there [in the Indy Racing League] and won races and done stuff over their numbers-wise.” Petty also added, “She’s just a marketing machine, and let’s look at the facts and be blunt about it. If she gets in that car and doesn’t win races, it’s not the car, it’s not the engines and it’s not the team.”

These comments along with a few others during the months leading up to her big announcement that she would indeed pursue a full-time career in NASCAR, has set the tone for her transition from open wheel to the NNS. The hype along with the expectations from her fans followed her into the 2011 season, where so far in seven starts she has lead four of the 1134 laps she has competed in, while picking-up one top-five, and three top-10 finishes.

Whether or not this was a big enough improvement to keep her detractors at bay, was clearly seen by the numerous comments after each race with the consensus usually being a lop-sided victory for the nay-sayers. Yet none of this kept has kept her or her loyal fans from believing the dream of becoming NASCAR’s next biggest star based on talent, and not on popularity alone as we shall see with today’s official announcement that Patrick will be behind the wheel of the JR Motorsports No. 7 Chevrolet, full-time in 2012.

Patrick now has the ball in her court, and her destiny lies within her own grasp whether or not she is the real deal, or just another pretty face trying to capitalize on her good looks. The season will be one her toughest not only in the stands, but also on the track since the NNS runs 34 races and 8,063 laps, as compared to 18 races and about half the laps in a much heavier car.

The scrutiny would have continued no matter which series she would have ultimately chosen, and only Patrick herself knows where her limitations lie, as well as what she is capable of achieving. Her final decision to race full-time in NASCAR is no longer an experiment, but after today has become a reality and she is ready to jump in with both feet. Popularity and talent can go hand in hand, but that will be up to her to decide since she is the one who made the choice to try and defeat the odds and seek after what many woman before her have dreamed about.

“I’ve truly enjoyed my experience in NASCAR to the point I want to do it full time. I feel like in the last year, I’ve really come around much more on the track and top-10s are happening much more frequently and I feel like I’m getting it more all the time.”