Chrissy Wallace Comes Into Her Own With Two Championships 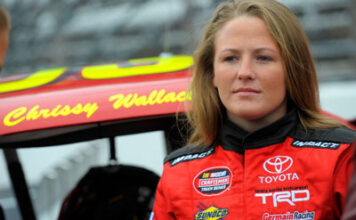 Although Chrissy Wallace may be from a famous racing family, including Uncle Rusty, Uncle Kenny, cousin Steven and dad Mike, she is definitely  coming into her own, especially with two championships now under her belt. [/media-credit]The 23 year old racer scored the I-44 Speedway Track Champion title, as well as the championship of the ASA West Regional Series. In the latter, Wallace made history as the first female champion ever.

“It’s a huge honor,” Wallace said. “It means so much to me. I still have butterflies in my stomach from being so excited.”

Although her own racer, Wallace is still following in her family’s footsteps, especially her father Mike, with these two championships.

“Years ago, my dad did the same thing,” Wallace said. “He won the track championship at I-44 Speedway and then he won the West Regional Championship.”

“It means a lot because of the whole family but at the same time it means a lot to me,” Wallace said. “I’ve never achieved a championship before.”

Wallace’s championships are even more impressive due to her team’s limited budget, as well as the staffing.

“There is so much support and effort that we’ve put into that car all year,” Wallace said. “We have one guy that works on our car full-time. My uncle and his son help me at the race track.”

“So, to achieve what we have is beyond my goals,” Wallace continued. “My goals at the beginning of the year were to finish in the top five in points and be able to win one race.”

“We wound up winning two championships and six races.”

Wallace has also been able to leverage her success, scoring a ride in the final ARCA race, the Toledo ARCA 200, presented by Federated Car Care, in Toledo, Ohio on October 16th for Cunningham Motorsports. The deal came about quickly, thanks to some sponsorship from her famous father and family.

“After I won the championship, Cunningham Motorsports and Paul Andrews did not have anybody running their car,” Wallace said. “They had Dakoda Armstrong that had been running their car on and off this year.”

“They didn’t have a sponsor so they came to my dad and said, ‘Look we know your daughter needs an opportunity and she would be a very good person to be in our car,” Wallace continued. “But we need sponsorship.”

“Pretty much we pieced together a deal to where my dad helped fund the deal along with a few more sponsors and some that we’re waiting back for a response.”

“This means so much to me,” Wallace said. “It’s finally something that I’ve been able to achieve to help my career go even further.”

Although Wallace has never been to Toledo, she has raced in the ARCA ReMax Series before. In her previous two efforts, she finished ninth at Talladega and was in second at Pocono before crashing out of the race.

“It will be my first time ever at Toledo,” Wallace said. “I’ve never seen the race track, never practiced, nothing.”

“We’re going to go to test next week at a track similar to Toledo,” Wallace continued. “We’ll spend the day testing.”

While Wallace has her hands full as champion of two series, as well as some upcoming racing, her future remains uncertain. And, like all young racers, the future is contingent on sponsorship.

“Right now we don’t have anything set in stone due to sponsorship,” Wallace said. “We have talked to certain truck teams that feel that they can help me out through the year to where I could possibly run seven Truck races for next year.”

“If we don’t have a sponsor, we will run the Late Model Series full-time,” Wallace continued. “If we find the sponsorship, I would run at least seven Truck races, and some ARCA races and perhaps even some Nationwide races.”

Who might Wallace consider as the most ideal sponsor for her and her career?  She has some interesting and creative thoughts for sure.

“Honestly my ideal sponsor is a company like Maybelline or Victoria’s Secret, a female based sponsor that will be behind me and know that I can market them,” Wallace said. “I can help them as much as they can help me.”

“Even something like Tampax would be a great sponsor,” Wallace continued. “It’s never been on a race car and all the guys would never have it on their cars.”

“But I want a female-based or female-driven company as a sponsor,” Wallace said. “Of course, I’d be happy to have any other sponsor, but a female driver with a female-based  company directed to females would help me out more.”

“I want to be able to market somebody and give them the value back they are giving me,” Wallace continued. “I really think that it would work out well.”

Although now one of many up and coming female racers, from most recognizable Danica Patrick to Johanna Long and Jennifer Jo Cobb to name a few, Wallace feels she is definitely unique.

“Honestly I’ve had the chance to race against some of the other female drivers,” Wallace said. “What’s different for me is that I have the talent, I have the passion and I have the wins and the championships to prove it.”

“I have more seat time too,” Wallace continued. “I think I have more of a driven goal than some of the others do.”

Wallace is indeed driven in all that she does and refuses to give up, in spite of sponsor struggles.

“I’ve been working hard trying to stay in the NASCAR Series since I was 19 years old,” Wallace said. “I’ve got to set my goals really high and try to over-achieve them.”

“I never want to under-achieve, I only want to over-achieve.”

“My main goal is that I want to start off in the Truck Series, win the Rookie of the Year and move my way up to be the first successful female as a NASCAR driver,” Wallace said. “I have to thank my family, all my fans and the sponsors that have helped me throughout my career.”

The young driver definitely credits her family as one of her primary supports. Yet having that famous last name can also add even more pressure to the mix.

“A lot of people expect things about of me because of having the last name of Wallace,” Wallace said. “I want to be the first successful female NASCAR driver.”

“ I want to be in the Cup Series and I want to win the championship,” Wallace continued. “So, I do put pressure on myself.”

“To make it to the level of achievement that my family has means a lot to me,” Wallace said. “There are not enough words to say what all this means to me because I haven’t figured out the right words yet to make it sound right.”