‘It’s all about the future. The future is bright.’; Bowyer joins MWR 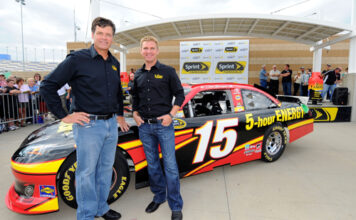 One of the worst kept secrets in motorsports was announced at Kansas Speedway today. Clint Bowyer and 5 hour Energy have joined forces with MWR and Toyota to pursue the Sprint Cup in 2012. Bowyer a 6 year veteran of the series who has 4 victories and 2 pole positions 30 top 5 finishes and 90 top 10 finishes ended months of speculation with the announcement today. [/media-credit]“It’s all about the future. And the future looks bright.” stated Clint Bowyer who declined to give specifics about the crumbling and ultimately ending of the relationship with RCR. “When I took them 5 hour energy and they still couldn‘t put together a deal I realized that was the end of it. But that is the past and this is about the future.” said Bowyer.

Bowyer commented on his new sponsor in conjunction with his past sponsors by saying, “To go from Jack Daniels to Cheerios as you can imagine was a huge adjustment. This one is much easier to with.”

Michael Waltrip stated, “We are very proud to announce the addition of Clint Bowyer and 5 hour energy to MWR. This is a watershed moment for our young organization, Cint is a proven winner and consistent Chase participant. He had a lot of options and it makes me proud that Clint and 5 hour Energy have chose to race with us.”

Bowyer and Michael Waltrip unveiled the No 15 5 hour Energy Toyota. 5 Hour Energy will be on the car for 24 races and 12 races still remain available on the car. The car a highly visible and appealing black and red and gold. With the number tilted backwards as per Clint Bowyers request.