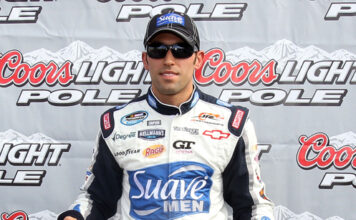 The new configuration proved to be a struggle for drivers like Daryl Harr who was one of the go or go home cars. Harr lost the car off Turn 4 and pounded it into the inside safer barrier wall.

Ricky Stenhouse Jr. qualified his #6 in the 11th position despite flirting dangerously with the wall during his lap. His closest championship competitor Elliott Sadler qualified in 6th.

It was Almirola’s fifth career pole as he narrowly edged Carl Edwards by 0.001 seconds for the top spot.

And for Danica Patrick fans, she qualified 25th.

Ryan O'Harahttp://www.twitter.com/RyanPrakOHara
Ryan O'Hara is the Senior Writer of FightNights.com and is recognized as one of the top boxing writers in America. He is also a former Fox News Radio news anchor and TV Producer for several networks. O'Hara graduated with his Masters in Human Security in 2017 with a 3.7 GPA and also obtained his Bachelor's Degree in 2015 in Global Security & Intelligence Studies -- all from Embry-Riddle Aeronautical University in Prescott, Arizona. O'Hara is also a former college ice hockey player and skates in his free time. Follow him @OHaraSports on Twitter!
Previous articleDodge Motorsports Notes & Quotes – Keys for Success – Phoenix 2
Next articleMatt Kenseth Wins Pole For Kobalt Tools 500