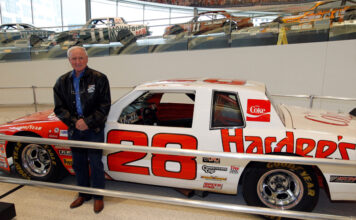 [/media-credit]NASCAR Preview 2012 was all about the fans and the fans came by the thousands.  Many camped out overnight in front of the Charlotte Convention Center, even standing in the pouring rain, in anticipation of the event.  This may sound crazy to some but I can only imagine the stories told and the new friends made while they waited patiently for the doors to open.

Sam Alverson of Jacksonville, Fla. had the distinction of being the first fan through the door after standing in line for 26 hours.

They came from all over the country carrying pictures and diecast cars to get autographs and a picture taken with their favorite NASCAR drivers.  Over 60 drivers from all three national divisions were there to accommodate them.

A few of the drivers even hung out after their autograph sessions and spent a few minutes talking with their fans.

A friend told me about one small girl that she saw carrying a tire through the long lines for autographs. She would carry it for a few feet, set it down for a quick rest and repeat the process again and again. Her father asked his young daughter if she wanted him to carry it for a while but she loudly told him, “No, I can do it.”

You can’t help but smile at the dedication and loyalty of NASCAR fans.

The day was filled with non-stop action including driver interviews on stage, sponsor exhibits and car displays. There were plenty of places to rest and get a bite to eat plus you could buy the newest items honoring Friday night’s class of inductees.  It may have been rainy and dreary outside but inside the fans were having the times of their lives.

The preview also honored the legends of the sport.

The day began with a free breakfast with Junior Johnson featuring his famous breakfast items. You could also get a picture and an autograph with the 2010 NASCAR Hall of Fame inductee.

Throughout the day you could take a NASCAR Hall of Fame tour that included a meet and greet with legends Junior Johnson, Ned Jarrett, Bud Moore, Richard Petty, Bobby Allison and Darrell Waltrip.

Finally the day ended with an “Evening of Living History.” These storytelling sessions took place at different areas in the Hall of Fame and were led by Cale Yarborough, Darrell Waltrip, Ned Jarrett, Junior Johnson, Glen Wood and Dale Inman who were joined by friends and family on stage.

Several of these were held at the same time so I chose to attend the one led by Junior Johnson.  It was held in front of his moonshine still and guests were encouraged to sample some of Johnson’s ‘Midnight Moon Moonshine.’ Although I didn’t indulge, the ‘Apple Pie’ flavor seemed to be the crowd favorite.

This turned out to be the highlight of my day so I’ve included one of several stories that left me with a smile on my face as I headed home Saturday evening.

Higgins opened things up with what he called his favorite “Junior moonshine story.”

It was back in the 1950s when Junior and Gwyn Staley, a good friend, headed up to Virginia to take two loads of moonshine to some thirsty sailors. They had to keep moving their stash to keep ahead of the revenuers so they had to drive across the Brushy Mountains to a hiding place near Taylorsville, N.C.

When they got there, they loaded up their hauler cars and were on the way back to Wilkes County to gas up the cars.

“They were coming across the mountain and saw where a car had slid off the road. Steam was coming out of it and two dazed men were walking around the car. So Junior who is a very kind man, generous and a Good Samaritan, stopped, although he had liquor in the car. He went up to this car that had turned over and lo and behold there was the high sheriff of Wilkes County and his chief deputy.” said Higgins.

By this time, everyone in the room was hanging on every word.

“They had liquor on their breath and lipstick on their collars and they’d been somewhere they shouldn’t have been.  The sheriff looked up and said thank God it’s you Junior. You’ve got to get us back to the courthouse or they’ll throw me out of office.” Higgins continued.  “Junior said, Hell sheriff I can’t take you to the courthouse I got a load of liquor in my car. The sheriff said, Junior if you’ll get me out of this I promise I’ll never chase you again and I’ll never let any of my deputies chase you.”

Johnson agreed to take the sheriff back.  So they rearranged the cases of liquor in the car to make seats and they took the high sheriff and the deputy back to Wilkesboro.

Higgins ended the story by saying, “Junior still sees the sheriff from time to time on the streets of North Wilkesboro and he tries to evade Junior but Junior won’t let him.”

“He’ll grin at him, wink and say, Sheriff, you been across the mountain lately?”

Kelley asked if the sheriff had been true to his word. Johnson just laughed and said, “After that, he didn’t even want to talk to me.”

Angela Campbell
A native of Charlotte, NC, Angela (Angie) was first introduced to racing by her father. An avid fan of NASCAR, she found a way to combine her love of racing with her passion for writing. Angie is also an award-winning member of the National Motorsports Press Association. Follow her on Twitter @angiecampbell_ for the latest NASCAR news and feature stories.
Previous articleQuotes from NASCAR preview 2012
Next articleNASCAR Nationwide Series May Be The One to Watch in 2012